"Executive career advancement is off the table if you aren't willing to open up and be yourself." For a senior manager aspiring to become a director with packaging company, this start to the annual performance appraisal was a wake-up call. We'll call him Wally.

It wasn't the first time Wally had heard this feedback. It was the first time it had been linked to his career advancement opportunities, and that got his attention.

Over the next six months, we worked on this. As his Executive Coach, I helped him understand what others were perceiving. Then we explored his choices, and Wally selected strategies to try. Tentatively, he stepped outside his comfort zone. Over time, he changed his behaviors in ways that were comfortable for him and meaningful to those who wanted to see this authenticity.

Eleven months after that fateful performance review, Wally was promoted to a director-level job. He continues, even now, working on his authenticity. These are his takeaways. 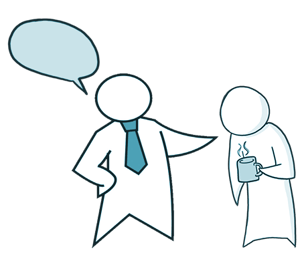 Wally resisted this for months. He was angry and hurt and in denial. He felt he was being unfairly targeted. After all, he reasoned, he was one of the smartest and most talented people in his division. His previous performance appraisals and promotions proved that to be true.

What Wally was unable to grasp, initially, that what got him "here" would not get him "there."

The lower rungs of the career ladder are easy to climb on your own. By demonstrating your skills and working hard, you rise above others with inferior skills or work ethic.

The middle rungs of the career ladder require that work ethic, superior abilities and determination. That's why long hours and stand-out contributions are required to make it into mid-level and senior management.

But the upper rungs of the career ladder are different. Individual contributions matter less. Ability to manage the work isn't enough either. At this level, people are looking for leadership. They want to know the individual they are being asked to follow.

Wally had spent his career guarding himself against interpersonal relationships that could interfere with his career trajectory. He proudly said "I'm not here to be anyone's friend. I have friends in my personal life."

With that mindset, Wally had developed an all-business persona. He wasn't seen as authentic because he filtered everything about himself out of conversations. He shared very little about his personal life, his values, his motivations and his perspectives. No one really knew him despite his 12 years with the company.

We covered this in another blog post, too, about the connections between career stagnation and an inability to be authentic. This is not an uncommon problem for high achievers who have been self-reliant in getting to their current level.

No one disputed Wally's technical brilliance and ability to get the job done. He was competent, and he stayed one step ahead of emerging trends and technology. He was, in fact, highly esteemed outside his company, too, for his thought leadership and process innovations.

Wally's achievements and technical abilities are what got the attention of his current employer. He was recruited away from his previous employer to the larger player where he saw more opportunities for advancement. He took a pay cut to make the move.

It turns out, though, that there was another reason Wally left the company where he got his start.

Over time, as we talked about this, Wally shared that he never felt like he "belonged" in that company. He had no mentors or coaches. No one sought his input. Rather, decisions were handed down and expected to be implemented without question. Wally said he felt like little more than "a worker bee."

He wasn't alone. He recalled that turnover in that company was significantly higher than it was in his current company (despite higher pay scales!).

I asked him to compare the behaviors of senior leaders at Company A and Company B. For Wally, this was a big "a ha" moment. There was, indeed, a marked difference. In the previous company, the people at the top were technically brilliant and achievement-oriented (just like Wally).

In this company, however, the C-Suite was populated by highly capable people who were not the top technicians. Instead, they were great at inspiring and enabling others. They were strong communicators and genuinely seemed interested in seeking diverse points of view from all levels of the organization. They made people (including Wally) feel like they were a part of something special, something they could be proud of.

Wally realized that he'd made a self-limiting mistake. His company offered professional development courses. He consistently participated, choosing the ones that gave him hard skills development. He had taken classes like "Finance for Non-Financial Managers" and "Strategic Thinking" and "Continual Process Improvement."

He had never opted for the classes that, to him, felt "fluffy" and unnecessary. He had not seen the value of developing his soft skills like "Active Listening" and "Giving Effective Feedback" and "Coaching for Development."

This was a setback, he now believed. It was a setback in terms of keeping his own skills well-rounded. It was also a setback in the development of his team. Wally was remorseful and upset when he realized he wasn't giving others the same sense of belonging that attracted him to and kept him with this company.

In hindsight, Wally wished he had mapped out a balanced mix of hard skills and soft skills development.

At the Senior Level, Career Advancement Depends on Connections

One of Wally's assignments during our coaching engagement was to shadow a C-Suite executive for a full day. I asked him to do two things. First, to record the amount of time spent on various categories of work including "interaction with people outside the C-Suite." And, second, to ask the executive why he chose to spend time the way he did.

Wally discovered that over 70% of the day was spent with other people. Some of this was planned meeting time, but most was the executive going out in the "trenches" and asking people for input or giving them recognition for efforts and accomplishments. Wally was stunned, and it took him a while to process this and see it as time well spent.

When Wally asked why the executive was making these choices instead of doing strategic analysis or meeting with peers, here's the answer he heard. "No one knows what people on the front line know. I'd be delusional to think that my peers and the reports we look at are telling me the real story."

Wally decided he needed the real story, too. To get it, he had to connect with people. That connection wouldn't be manager to subordinate. It wouldn't be peer to peer (which, until now, had always been more competitive than collaborative for Wally). Instead, he decided, it would be a connection based on openness and genuine interest in knowing others and being known.

For him, there was now a business case he could make for authenticity. The self-erected barriers came down, practically overnight. Those barriers -- the ones between Wally and other people -- were the very same barriers that were in the way of Wally's career advancement.

(EDITOR'S NOTE: This blog was originally published in January 2017 and was recently updated.)