Teams are usually formed in order to solve some sort of problem. Unfortunately, the team formation can cause additional problems. This happens when there is a real or perceived imbalance of power. 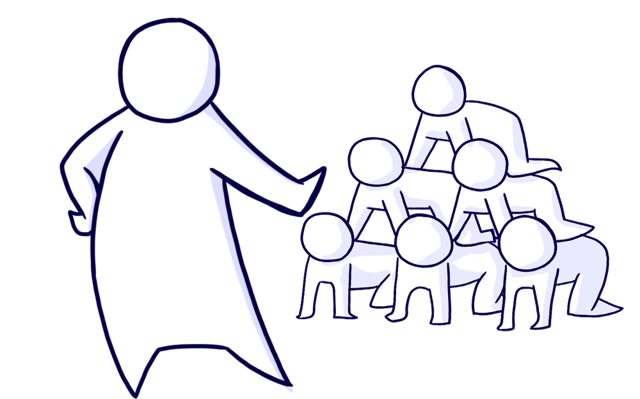 Here's how to work in a team and rise above the power dynamics.

1. How to work in a team when you are the boss

Be sure to take a look at last week's CONNECT2Win post that specifically addresses this. Being a team leader requires a focus on making space for others to lead, too.

Your sensitivity to other team members will heighten your awareness of:

- team members holding back, looking to see your response before proceeding. Do you really want everyone to wait for your signal before diving in to do the work?

- a lack of real dialogue and debate. If people are deferring to your opinion, why bother bringing in a team at all?

- who is showing real potential as a leader. Who do others respond to? Who seems to influence the direction of the group when you allow space for that to happen?

2. How to work in a team when you want to prove your next-level abilities.

Caution! This is not the time or place, in a team setting, to become overbearing and bossy.  In your eagerness to demonstrate your abilities, you may be tempted to seize every opportunity in an effort to prove yourself.

This will make you look overly ambitious and ineffective.  If you are not respectful of others and try to get the spotlight for yourself, it will backfire.

To consistently demonstrate your abilities, be a leader. That means drying out the best from everyone and allowing space for them to shine, too.

3. How to work in a team when you are at odds with your peers

Cross-functional are often taxed with the simultaneous expectations of getting things done while representing individual and conflicting needs.

Teams are asked to break down silos, but team members are also expected to represent their own functional areas.

This leads to conflict. When you add a history of drama and conflict from the same team members in the same confusing setup, teamwork may be dreaded instead of embraced.

When there is an imbalance of power stemming from this kind of conflict, the best thing you can do is re-focus on the common goals and mutual interests all team members.

Despite individual roles and competing responsibilities, there is common ground. Figure out what it is and start there. This is the great equalizer.

4. How to work in a team when you were the junior member

If you are new to the company or new to the team assignment, you may feel you should hold back. While it's true that you need to respect what's happened before you, you should also know that your fresh perspective may be exactly what this team needs.

New or not, no team member is valued for simply occupying a seat. Do the work of getting up to speed, but also ask questions. Avoid saying things like "this is how we did it where are used to work…" and, instead, dignify the efforts of this team by asking things like "what's been done or talked about in relation to..."

Observe how often other team members are contributing. Aim to be contributing more then some and less than others. You need not dominate or hold back entirely.

5. How to work in a team when you're the minority voice

Unless the decision has already been made, your opinion matters. You're a part of this team for a reason. Without being overly aggressive, assert your thoughts into the conversation.

Holding back just because the majority seems to be moving in one direction is a bit cowardly. Appropriately voicing your opinion requires a little currish, and that is what your team expects of you.

If you don't voice your opinion, you lose the right to object to the groups decisions and positions. Don't be that team member who talks negatively about team decisions but never really contributed to them.

Next Steps for Figuring Out How to Work In a Team (no matter who else is on the team!):

The blog for everyone who works with anyone

Deb Calvert is President of People First Productivity Solutions, the company that helps you build organizational strength by putting people first. Book Deb today to facilitate critical team meetings, to speak at your leadership or team events, to conduct MBTI workshops to improve team effectiveness, or to work with you as your executive coach.

Editor's Note: This post was originally published November 2016 and has been recently updated.