He Cracked the Code! How to Build Team Spirit at Work

Shouting matches were the norm. Fist fights had been averted, so far. Name calling and personal attacks had become commonplace.

Inside and outside of the Boardroom, this executive team went after each other... hardly the model example of team spirit at work. 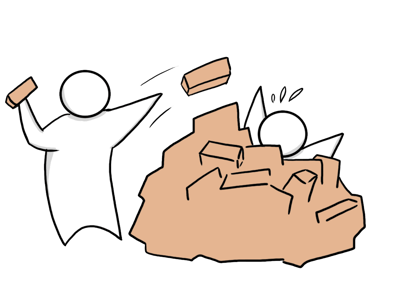 The company's robust growth masked the problems. Their strong brand enabled more of the same bad behaviors. When you're successful, your faults don't seem as significant.

But then, something happened that would change everything.

The Straw & the Camel's Back

To manage and sustain growth, the executives agreed new company-wide processes and systems were necessary. They convened an ERP task force to select a vendor partner to identify best practices and map out the action plan for integrations. Like the executive team, the members of this task force came in swinging. The implied message they'd each heard was defend your functional business unit.

Their disagreement swiftly escalated back to the top. In fact, it reached the attention of a Board Member who publicly called out the CEO.

That's when this executive team of eight highly paid, highly competent individuals spent three days in an off-site retreat. Good idea, bad execution. They spent most of time arguing about the minutiae of day-to-day work flow. They accomplished absolutely nothing.

They were able to agree on one (and only one) thing: they needed help.

Five of the eight were able to agree on a single coach. They hired a team coach to facilitate their meetings and help them build their own team effectiveness. (Once they worked out their own issues, the coach also supported the task force months later.)

There was a lot of baggage. Their shared history and their bad habits. They operated with mistrust and internal competition and personality conflicts and inflated egos.

Step one, the Coach decided, would be to crack the code of this team's unique dynamics.

Here's how he did it, and what he found.

When the Coach interviewed each team member individually, he picked up on a theme.

Seven of them had significant athletic backgrounds -- a semi-pro tennis player, an LPGA golfer, college football and basketball stars, and a distance runner.

It became apparent that winning mattered greatly to each individual. But each had a different definition of what it meant to win and how to do it. While all had a sense of "team," their perceptions of their roles within the team varied dramatically.

The "A-ha!" moment was that team spirit and team contributions look different in the workplace than they do in sports. Among the differences they identified:

With these discoveries, the executive team acknowledged that they had been competing with each other. They decided to work on cooperating instead.

(It was a good first step, but not the ultimate goal.)

To cooperate: To work together; to get along

Breaking their habit of competing enabled them to work together and get along. One team member likened it to the way two-year-olds play together.

They aren't interacting, she said, but playing side-by-side, with an occasional exchange of toys or some acknowledgement of each other.

The team relaxed into cooperation within a few months. They held each other accountable to working together and getting along. Then it was time to take the next step: turning cooperation into collaboration.

To collaborate: To join together; to join forces

As children get older, their playtime becomes more interactive. They play together instead of merely playing side-by-side. This team did the same.

As they joined forces, they expanded their own capacity. They learned more about each other's challenges and enlisted support from each other more frequently. They brainstormed and problem-solved together. They broke down silos between their respective departments.

Over time, they came to appreciate the power of collaboration. They enjoyed the strength that came with joining together vs. working alone or side-by-side.

Team Spirit at Work Requires a Different Kind of Commitment

Long-term success requires true collaboration where the team commits to giving the best of themselves AND to extracting the best from each other. This commitment extends from the strongest member of the team to the weakest.

Letting some sit on the bench while others get to play isn't collaboration.

Passing the ball to a single dominant player who consistently scores isn't collaboration.

The commitment to collaboration changes things. This commitment includes:

If your team needs to build a strong skillset for collaboration, start with this CONNECT2Win Skills Checklist for teams. Consider bringing in a team coach. Have frank discussions about what it means to truly be a team.

Next Steps for Building Team Spirit at Work: