In seeking work-life balance, what makes a good team player? It's a good question, because sometimes you have to rely on your team so you can find your balance.

For a small-town newspaper to willingly send people across state lines for a story, it has to be a big story. In 2011, I was the managing editor of the Pittsburg (Kan.) Morning Sun, and the Pittsburg State Gorillas were heading to the Division II national football championship in Alabama. 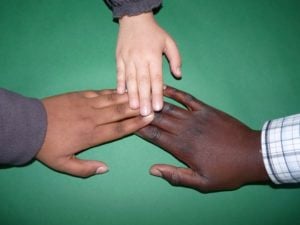 We had a good plan: We had two designers who would stay back in Pittsburg and design a 32-page special section as well as the championship game papers, while I’d go with our photographer and sports editor to Alabama to serve as a second writer. The three of us would leave on Wednesday afternoon to get to Alabama before all the festivities on Thursday/Friday, as well as the game on Saturday.

It was a good plan on paper. But the best laid plans of mice and men… you know the rest.

My wife had a gynecologist visit in the morning the day before we’d leave. Turns out, she had grapefruit-sized cysts on her ovaries, and emergency surgery was needed that day. It wasn’t a particularly complicated surgery, but she’d need a few days of recovery and sleeping it off. Obviously, I wasn’t going to Alabama.

A reliable team is part of what makes a good team player!

With Alyson’s blessing and while waiting for her surgery to start, the calls began. Hey Boss — I’m not going to Alabama. Hey photographer/sports editor — you’re going to Alabama without me (also, you’ll need to take one of your cars). Sports editor, you’ll be writing all the news stories, too. Hey other co-workers — you’ll have to take on more of a load.

The surgery went well for Alyson; I took her home. When you have people you trust to excel, the only thing left is to get them on the same page, then get out of their way. After a short meeting — while Alyson slept — we sent the duo off for Alabama while everyone else in the newsroom took on my daily assignments.

Being in Pittsburg allowed me to focus on the 32-page special section the next day (Alyson allowed me to work, since she was mostly sleeping anyway). It allowed our two young designers to work on the paper without backup, and they did great. It allowed our sports editor to spread his wings and write a few news stories. It gave more flexibility to the pair in Alabama.

Strong communication is part of what makes a good team player!

When the game took place on Saturday, I was watching the game on TV in my living room, coordinating by text message and phone while posting to social media. Pittsburg State ended their magical season with victory, with now-Arizona Cardinal John Brown a key member of the team.

What most people don’t understand about the media is that the game is the easy part. The chaos really gets going after the whistle blows.

While our photographer downloaded photos as fast as he could, I wrote a short placeholder story for the website. We tweeted and Facebooked (there needs to be a single-word verb for that) and more. The sports editor did as many interviews as he could before writing until his fingers fell off.

Since we had most of the afternoon, the two designers and I decided to each come up with our own plans for the front, and then we’d pick and choose for the final edition.

That afternoon, things came together. Photographs came in by email. Stories poured in from the sports editor, both news and sports. Once freed from our own mental limits, the design was unleashed.

As I reminisce, I realize that I don’t remember the details of the hard work, the frantic phone calls, the multiple rearranged plans, the technology concerns or the in-the-moment frustrations that surely drove me crazy. I know they happened, but I can’t tell you what was said or what specific thing made me angry or how we dealt with things. Time has a way of clarifying the past.

Today, I’m one of those people with framed copies of that paper. One is in my home and shows the cover of the sports page. The other is in my office — on the walls of a different college — and shows the front cover.

They stand less as memory of the local sports team, but rather as testament to the best top-to-bottom edition of the newspaper we published in my four years as managing editor. It’s the lasting symbol of my proudest moment as a team.

Andrew Nash is a recovering journalist living in Liberty, Mo., and working as a communication specialist for William Jewell College. He used to write award-winning series about poverty. Now he analyzes media coverage, discusses current events and writes about the best Sesame Street muppets at his blog, www.newsjudgments.blogspot.com. He is married with nearly 2-year-old twins.

Next Steps in learning what makes a good team player:

Thank you to Andrew Nash  for this guest blog post about what makes a good team player. This blog is a product of People First Productivity Solutions where we build organizational strength by putting people first. Our president, Deb Calvert, is a certified executive coach and leadership development specialist, working with teams to bring out the best in everyone.