Are You Making These 10 Common Mistakes in Meetings?

If the mere mention of “meetings” makes you recoil, your organization may be making these common mistakes in meetings. They don’t have to be something you dread! Meetings shouldn’t be soul-sucking, time-wasting, pointless, or unproductive.

Over the next 12 weeks, the CONNECT2Lead Blog will bring you fixes for the problems that make your meetings miserable. Be sure to subscribe so you won’t miss a single one of these posts in the series, The Top 10 Fixes for Miserable Meetings.

Time Is Money. Are You Wasting Both in Meetings? 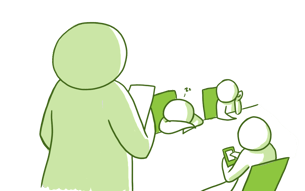 Before you call a meeting, run the numbers. Here’s how.

For our example, we’ll run the numbers for a recurring, one-hour meeting for a cross-functional team of 12 mid-level managers involved in a project. This group will meet weekly for a 3-month period.

This simple approach doesn’t take into account the other variables – prep time before the meeting, cost of disrupting other work, lost opportunity costs, costs beyond salary (benefits, meeting supplies and snacks, cost of a meeting room or tech, etc.). Nevertheless, the costs mount up quickly and often exceed the value of a meeting.

To make meetings high value and worth the investment, there are disciplines and practices that every meeting host should be responsible for using.

The widespread waste of time and money in meetings is a growing problem:

For all these reasons, bad meetings cost enterprises $399 billion each year (Doodle study of 6,500 companies and 19 million meetings).

It doesn’t have to be this way.

Assessment: Which Mistakes in Meetings Are You Making?

We’ll take a deeper dive into each of these mistakes in the Top 10 Fixes for Miserable Meetings series.  You’ll get actionable ideas, tools and processes, and fixes that transform miserable meetings into highly productive, people-building, effectiveness-accelerating, solution-oriented meetings.

To get started, use this assessment to diagnose the time-wasting, productivity-sapping issues with your meetings. Check each item that applies to meetings you conduct or attend in your organization.

Meetings Mistake #1: All Over the Map

_ There is usually more than one topic covered in each meeting.

_ Casual conversation, personal sharing, and tangential topics are a part of our meetings.

_ Most meetings include dissemination of information, discussion, and decision-making.

_ Meetings end when the clock says it’s time for them to end (or shortly after) even if we haven’t covered all the topics or recapped.

_ The level of participation depends on attendees’ interests, moods, or styles.

_ Most meetings are the same with little distinction between types of meetings.

_ Going into a meeting, we are not given a single focus as a desired outcome.

_ Even when discussion or input is desired, people have no advance time to prepare.

_ Sometimes people leave meetings with vastly different interpretations of what was said.

_ We frequently talk about the same issues in multiple meetings without getting resolution.

_ Some people take notes. Some don’t. It’s a matter of personal preference.

_ We do not take time to review the quality of our meetings at the end of them.

_ Meeting notes are not distributed to those who attended.

_ We do not have a process for “mining for conflict” or stirring up debate.

_ There are no assignments about who does what in the meeting. We just attend and go with the flow.

_ Meetings sometimes get derailed by off-topic conversations or tangents that drag out.

_ Keeping on track with the agenda is rare for us. Some topics take longer than planned.

_ Not everyone participates equally in our meetings.

_ When conflict flares up, it’s not really managed well and is sometimes divisive for us.

_ The person facilitating the meeting is also participating in the discussion.

_ Meetings are discussion only and do not include a variety of activities.

_ People who conduct meetings have not had training in meeting facilitation skills.

_ We do not have a playbook of meeting protocols.

_ Meetings do not begin with an overview of what we will cover and how to cover it.

_ Agenda items are not labeled with anything that signifies how participants will engage.

_ No one is responsible for making sure that all voices are heard and all ideas are considered.

_ No one is responsible for capturing takeaways or checking for common understanding.

_ We often use meetings when a simple email or announcement would suffice.

_ We have standing meetings on our calendar and get together even if we don’t need to.

_ People are afraid to miss a meeting because it’s the only time when information is shared.

_ Some meetings seem more about positioning of individuals than actual value of content.

_ I like to go to meetings to socialize and hang out with my colleagues.

_ We celebrate birthdays and recognize accomplishments during our meetings.

_ Anyone can contribute to the agenda items for a meeting.

_ Some of our meetings are collaborative project work sessions.

Meetings Mistake #5: Back to the Drawing Board

_ We have an agenda for every meeting.

_ We seldom have an agenda for our meetings.

_ Agenda items also include estimated time frame for the topic.

_ We rigidly adhere to our agenda.

_ We don’t stick much to our agenda.

_ The agenda for our meetings does not include pre-work or preparation.

_ The agenda for our meetings does not include time for action planning.

_ The stated objective(s) of meeting topic(s) are not included in our agendas.

_ There is not a process for contributing items that will be included on the agenda.

Meetings Mistake #6: Too Many Cooks Spoil the Broth

_ We often have to call another meeting to get the right people involved in discussion.

_ People who attend sometimes don’t have much to contribute to our meetings.

_ During meetings, some topics need to be taken “offline” into other, smaller meetings.

_ People who are invited to meetings don’t always show up to participate.

_ Department heads attend a lot of meetings instead of delegating attendance to others.

_ A lot of people in our meetings don’t have decision authority and have to consult others.

_ There are a lot of competing interests/needs represented in our meetings.

_ People attend certain meetings to protect their turf or advocate for their own needs.

_ Some of our meetings have audiences instead of participants.

_ You never know in advance who will show up for our meetings and who won’t be there.

Meetings Mistake #7: The Hands of Time

_ Meeting invitations show up on my calendar with no context or advance warning.

_ Meetings can be at any time throughout the workday.

_ Not enough time is budgeted during meetings for deep discussions about important issues.

_ People agree quickly or hold back their comments to save time during meetings.

_ Meetings are often back-to-back, with one ending and another starting at the same time.

_ Meetings are often cancelled or rescheduled due to other pressing matters.

_ It’s nearly impossible to find meeting times when all the right people are available.

_ Certain meetings are required, and there’s a consequence for not attending.

_ There’s no time to process what happened in a meeting before bouncing to the next task.

_ We tend to talk over each other and jump in when we have something to say.

_ People pop in and out of meetings to take calls or handle urgent needs.

_ There are power plays, politics, and positioning apparent in our meetings.

_ We don’t always maintain civil or respectful tones when conflict surfaces in our meetings.

_ Sometimes people get publicly singled out for not being prepared or onboard.

_ There are some who use body language to signal their displeasure during meetings.

_ In meetings, we ignore or overlook some people’s bad behaviors.

_ Certain people band together and support each other during meetings.

_ We have unproductive conflict because people make things personal in our meetings.

Meetings Mistake #9: Out in the Cold

_ Some people are more reserved and don’t speak up very much in our meetings.

_ We’d rather make fast decisions than debate issues from every angle.

_ We have “false harmony” in meetings because won’t admit when they disagree.

_ The post-meetings discussions with individuals reveal how people really feel about the topics raised in meetings.

_ Some people are too slow and methodical in meetings, and we often move on without waiting for their input.

_ Once the meeting leader or senior manager takes a stand, we fall in line and the discussion about that topic ends.

_ Our meetings don’t include much discussion.

_ Being a “Devil’s Advocate” or contrarian is unwelcome in our meetings.

_ No one wants to poke holes in ideas offered because it would make meetings last longer.

Meetings Mistake #10: At a Distance

_ In virtual meetings, some people are on camera and some are not. It’s a personal choice.

_ In virtual meetings, cameras are on but there are a lot of background distractions.

_ In virtual meetings, there seem to be a lot of technical issues to deal with.

_ Some people attend meetings in person and some attend virtually.

_ Our meeting length is about the same whether the meeting is virtual or not.

_ During virtual meetings, we tend to be a little less formal.

_ During virtual meetings, people multitask more. We have to repeat things quite often.

_ There is no whiteboard used during our virtual meetings.

_ We usually don’t take breaks during our virtual meetings. People come and go as needed.

_ We don’t do round robin checks during virtual meetings because everyone is too busy.

How many check marks did you make? There are 100 possible mistakes here that you may be making during meetings. Some may not sound like mistakes… But they are. We’ll explain it all, week by week, as we give you a playbook for dramatically improved meetings throughout this series.

Can’t wait 12 weeks to get all the fixes we’ll be bringing you? To get started, try these quick, easy fixes:

1. Establish meetings protocols and hold everyone to them. This will eliminate confusion and make meetings more cohesive. Answer unasked questions like these with your protocols:

2. At the beginning of each meeting, declare the desired outcome. Note that “outcome” is singular, not plural. Focus on one (and only one!) key outcome for each meeting.

3. At the end of each meeting, recap what was settled and what needs to happen next. Be specific about deliverables, timelines, and who is responsible for each action item.

Come back each week for more in-depth meeting fixes in this CONNECT2Lead Blog series. Your time and money is valuable. Continuing with miserable meetings is bad business.