A Leader's Story: Being Manager vs Leader Almost Cost Me My Job

Naomi's title wasn't Leader. It was Manager. That's why she was stunned when her annual appraisal included low marks for "effective leadership."
When she asked clarification about what was lacking, she got a laundry list:

Naomi's reaction was one I've heard many times before from clients when discussing being a manager vs leader. She asked "Isn't that my boss's job?"

Manager Vs Leader Is All About the Position on the Org Chart. Right?

Being a leader has nothing whatsoever to do with occupying a certain spot on the org chart. Somehow, we've started using the terms "Leader" and "Senior Manager" and "Executive" as if they are synonyms. They're not.

Being a manager, despite the level of the management role, means getting work done through other people. Managers handle the work that needs to be done today in order to

deliver on the goals assigned to a particular work unit.

Being a leader, despite the formal job role held, means guiding others and showing them a path forward. Leaders look to the future. Leadership is "the art of mobilizing others to want to struggle for shared aspirations." (Kouzes/Posner, The Leadership Challenge®).

Manager Vs Leader: If Forced to Choose, I'd Pick...

Naomi's struggle before and after that appraisal was in thinking she had to be one or the other, leader OR manager.

She kept choosing manager. After all, she reasoned, her job description and performance metrics were primarily related to getting today's work done right. The longer term vie

Of course, there's nothing wrong with being a manager. Naomi was absolutely right in continuing to do this work. She handled each day's tasks as they came. Those tasks included the never-ending hiring and onboarding and performance managing of CSRs.

Another year passed. It was Naomi's second annual appraisal in a supervisory role. This time she was prepared for it, and she asked to include a 2-page statement to refute the low marks on leadership. She didn't deny her lack of leading. She denied that it was her responsibility to lead.

That got the attention of an HR Business Partner who had noticed a trend with CSR exit interviews. She met with Naomi to talk about the expectation for every manager in the organization to also be a leader.

Once Naomi got past the either/or idea, she slowly adjusted to the idea of becoming more effective as a leader.

25 Differences to Help Draw the Leader vs Manager Contrast

Over time, Naomi explored the differences. We met after she downloaded the People First Productivity Solutions list of 25 Differences between Managing and Leading.

25 differences may seem like a lot. When you download the worksheet, you'll notice that some are similar, just more nuanced. That's to help paint the picture as clearly and completely as possible.

Like many, Naomi posted this and began referencing it on a regular basis. She created a weekly check-in for herself in an effort to balance her management work with her leadership focus. She came to the conclusion that she needed to manage the work and 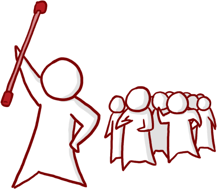 lead the people in her department.

One day, she had an a ha moment that prompted her to email me. It was that email that opened our conversation. Her email was short and to the point. It read "If someone who used to manage starts to lead, too, will they see better employee retention stats?"

It turns out that Naomi's new leadership behaviors were improving the work environment, employee engagement and, yes, even employee retention. Now, 18 months later, Naomi has not seen a single job opening in nearly a year. There used to be 3-4 job openings at all times.

Another a ha soon followed. When Naomi shared this discovery with her boss, she found out that her initial resistance to being a leader nearly cost her the manager-level job. Her just-in-time turnaround spared her that outcome.

Being both a leader and a manager starts with seeing yourself as a leader and understanding what it means to be one. Take a page out of Naomi's book and don't box yourself in.

Wondering how to build the skills for both leadership and management? Here's how to get started:

(This blog was originally published in March 2017.)