Most Associate Honesty & Integrity with Being Trustworthy, But…

Do you consider yourself to be trustworthy?

You may define trustworthy as being honest and/or showing integrity. Although those are important aspects of trustworthiness, there are 11 other dimensions of trust. We’ll be examining those throughout this 13-part series on trust.

Since this is the most dimension most often associated with trustworthiness, we’ll start with honesty and integrity.

What Does Integrity Really Mean?

To get a complete understanding of what it means to have integrity, don’t stop at the first bullet point. Instead, think about this notion of wholeness because it’s the part that people are trying to define when they attempt to describe integrity. 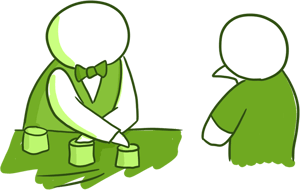 With wholeness, you become easier to understand. Your actions are more predictable and make sense to others. With unity in your words and actions, you’ll consistently adhere to professed values and principles.

Wholeness creates workplace bonds. When people know they can rely on you and anticipate your responses, interpersonal relationships improve.

Being whole, undiminished, and adhering to principles inspires trust because it lives little room for doubt about your motives. People are less likely to suspect you have a self-serving hidden agenda when they have context and understanding (the whole picture).

As you evaluate your own integrity, think about it from others’ perspectives. You may have integrity, but can they see it in your words and actions? Do they know what you believe in and stand for? Are you consistent and transparent in the decisions you make and actions you display?

If not, you may be inadvertently causing others to mistrust you. They don’t have enough information to conclude that you a person of integrity.

How Are Honesty and Integrity Related?

The link between honesty and integrity is found in another word, one that’s less known and seldom used. Probity means “integrity and uprightness; honesty.” It comes from the Latin words “probitas” meaning honesty and “probus” meaning virtuous.

Additionally, honesty is part of the primary definition for integrity and is generally considered to be part of a sound, moral character.

Portions of the definitions for integrity and honesty overlap. For example, one of the dictionary definitions for honesty is "genuine or unadulterated.” That’s similar to integrity’s definition of “being whole, entire, undiminished” and “unimpaired, perfect condition.”

Before you check the box on honesty, take a moment to be honest with yourself.

According to an article in Psychology Today, deception is rampant. Bella DePaulo, Ph.D., conducted a study with people ages 18-71. The subjects journaled daily about the falsehoods they told. They excluded mindless pleasantries (like “I’m fine) to assess the frequency of lying. The findings of this and other studies include:

In other words, people lie frequently enough that “little white lies” and half-truths are commonplace. We may justify our own lie-telling and accept others’ deceptions by accepting that “everyone lies.”

Here’s the problem. Once you’re caught in a lie, it will be difficult for others to believe you even when you’re telling the truth. Remember Aesop’s Fable about The Boy Who Cried Wolf?

It may not be fair, but we hold others to a higher standard than the one we hold ourselves to when it comes to honesty. We excuse our own dishonesty, rationalizing that it’s necessary or harmless. But we take great offense when others lie to us. They do the same. If someone else catches you lying, they will judge you as dishonest and untrustworthy (just as you would judge them).

Worse yet, you may never know when someone thinks you’ve lied. People in the workplace are often too uncomfortable to confront. This allows the lie (or even the perception of a lie) to remain as a barrier between two people.

Here’s where integrity comes back into the mix. Oftentimes, the perception of a lie is the result of people seeing incongruence. Two things don’t match. Yesterday you said ____, but today you’re saying _____. Or your actions don’t match your words. The mismatch diminishes the wholeness or integrity, leaving ample room for doubt about your intentions and trustworthiness.

Being honest with yourself is part of developing and displaying integrity. Intellectual honesty requires self-awareness so you can be more objective and less inclined to yield to your own unconscious biases. Keeping an open mind, not pretending to have all the answers, pursuing truth over needing to be right, and looking for the complete picture all demonstrate elements of integrity.

What If Others Don’t Understand the Importance of Being Trustworthy?

Throughout this series, we’ll look at trust as a 2-way street. Making sure that you’re trustworthy in all 12 Dimensions of Trust is only half the equation. The other half is finding ways for you to more fully trust others. No matter who has breached trust, the aim is to restore it.

When it comes to honesty and integrity, others likely fall into one of these groups.

Group one (the majority) are like the people mentioned in the studies above. They lie occasionally for convenience, to avoid pain, to spare others’ feelings, and to expedite conversations. They mean no harm and believe their lies to be inconsequential. Sometimes, people in this group aren’t lying. It just looks that way because there’s a gap in the interpretation of what they’ve said or done.

Group two (a small number of people!) lie for personal gain and/or to injure others. Their lies are more frequent and more egregious than the ones told by the folks in group one. They lie without remorse and without caring about the impact on others.

When you’re attempting to rebuild trust with people in group one, start with the assumption that there was not a lie and that there was good intent. Give them the same grace you would give yourself. Have a conversation about your misunderstanding and seek to get more information that explains the situation differently. Don’t make accusations. Seek clarity instead. Open with a statement like “I’m a little confused because ______, and that seemed different from ________. I’m just looking to get a better understanding of the situation.”

If you think you might be dealing with someone from group two, start with a gut check. Do you feel this way because there are other issues? Or do you have indisputable evidence that lies have been told and that those lies were for personal gain and/or to injure others?

If you’re not certain, proceed initially as you would with someone in group one. Keep an open mind until you’re sure that this individual is in group two.

Once sure, be candid. Describe the specific examples of lies you were told. Explain the impact these lies have on your ability to trust this individual. Talk about the importance of being able to trust each other and share that you’d like to restore 2-way trust but need honesty going forward. Throughout this conversation, there’s no need for name calling, shame or blame. A simple, objective, dispassionate recap of the examples will suffice.

The key here is in explaining why it’s so crucial for the team to be trustworthy and to be honest with each other. To make behavioral changes, people need to know WHY it matters.

Following that difficult conversation, reiterate that this was offered in the spirit of support and concern. Don’t take this public or make it a permanent indictment of someone’s character. Allow for behavior change to be demonstrated. When it is, acknowledge and appreciate it.

Honesty and integrity is the first dimension of trust. Each week, here in the CONNECT2Lead Blog, we’ll tackle another dimension. In the meantime, to assess yourself on the 12 Dimensions of Trust, download this free tool from People First Productivity Solutions. You can also use this tool to identify root causes for your mistrust of others. That will open up productive dialogue!

Topics: 12 dimensions of trust, being trustworthy