Trust in the workplace is obvious asset. It makes everything easier, life happier, and results better. But trusting co-workers isn’t automatic. Trust can be broken in so many ways.

Oftentimes, when we’ve lost someone’s trust, we don’t even know that we’ve lost it. We don’t know what we said or did that caused them to mistrust us. Without that knowledge, restoring trust is nearly impossible. 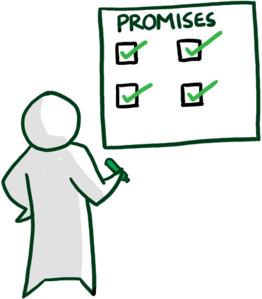 In this CONNECT2Lead series about the 12 Dimensions of Trust, we’re examining all the primary obstacles to trusting co-workers (and to being trusted by them). In this post, we’ll look at one dimension that is easy to understand because it’s observable and measured in actions.

What People Who Trust Each Other Do More Often

Certain dimensions of trust, like loyalty, are as much about feelings as they are about actions. That makes them more challenging to demonstrate and more subjective to measure.

The one clear, measurable, observable, objective dimension of trust is follow through.

Behaviorally, follow through is simple: do what you say you will do (DWYSYWD).

Doing what you say you will do includes:

People who trust each other more often follow through with each other and less often dismiss commitments to each other.

People who trust each other follow through because they recognize the weight of their promises and the impact on others if those promises are not honored.

At the beginning of any relationship, follow through is one of the first ways we gauge whether or not someone can be trusted. If they aren’t delivering on the little things, we won’t be able to trust them with the big things.

It may seem insignificant to forget an action item or a comment like “I’ll get back to you tomorrow with an answer.” Not following through on these little matters, however, signals a lack of care for the other person. What’s insignificant to you may be far more significant to them.

Take this self-assessment to see whether or not you’re following through frequently. 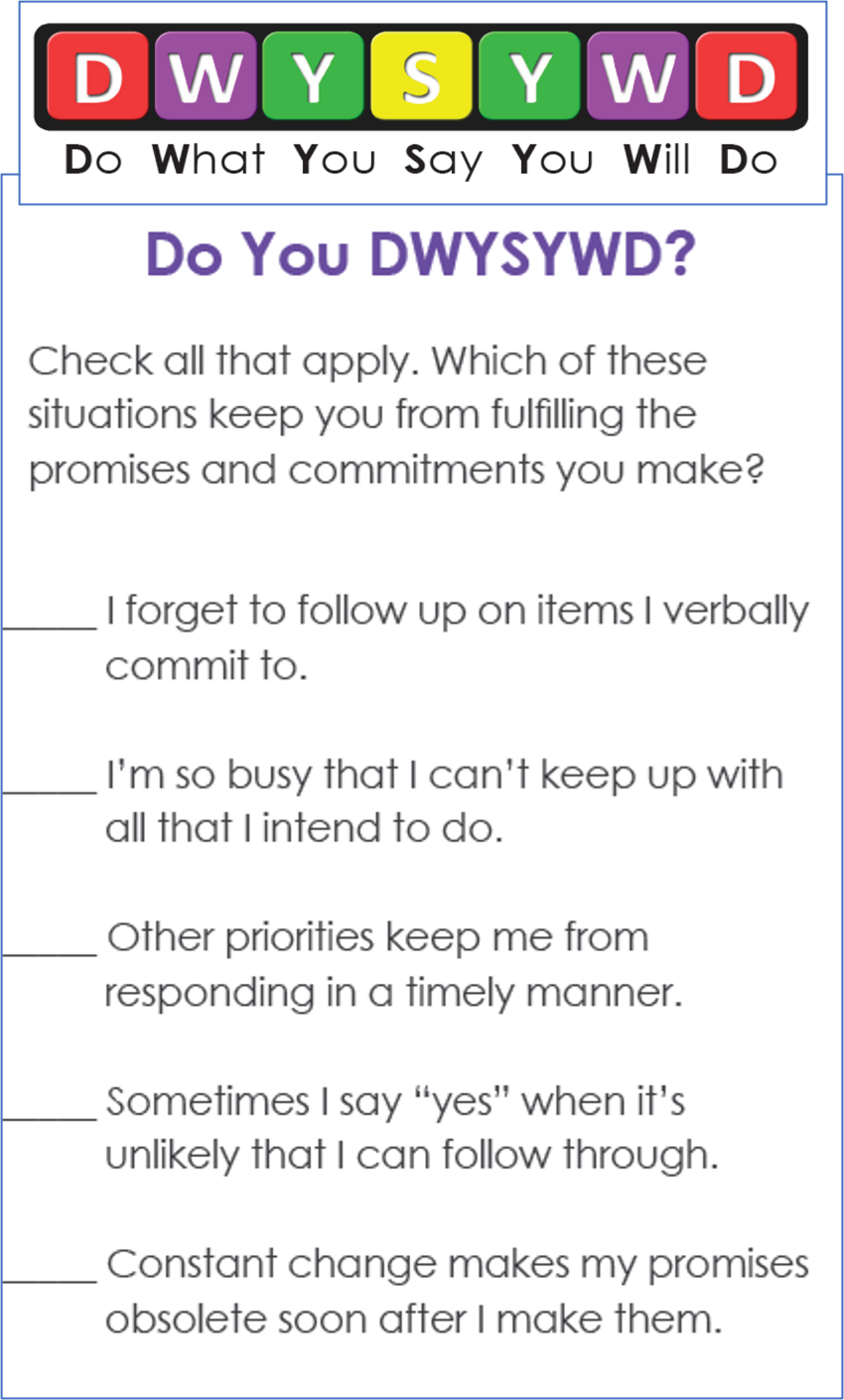 Personality assessments like the Myers-Briggs Type Indicator (MBTI) reveal that we all have natural preferences. For some, living in the moment is vastly preferred over being bound by deadlines, details, and structure. People who have this preference can be reluctant (even resistant!) when it comes to making commitments and being constrained by them.

This is one reason that some people seem to view commitments so casually. They make or imply promises but don’t take them seriously. It isn’t meant as a slight to others when they fail to fulfill. Rather, this oversight is borne out of a strong preference for living moment-to-moment.

But that doesn’t make it okay.

When one party believes a commitment has been made and takes it seriously, it’s unfair for the other party to treat it lightly. Promises and commitments cause others to act accordingly. The person receiving the promise counts on it and makes subsequent decisions based on the promise. When the follow through is lacking, it can leave the recipient in a bad spot.

To develop a discipline of living up to your word, step one is being realistic. Ask yourself:

Your intention to deliver isn’t sufficient. Others gauge your trustworthiness by your actions. Following through in a timely manner is demonstrated in actions, not intentions. Don’t make excuses for yourself.  Don’t expect others to repeatedly give you grace for your good intentions. They won’t.

Although follow through is only one of the 12 Dimensions of Trust, it has a ripple effect. When you make a promise but don’t fulfill it, people may begin to feel you’re dishonest, lacking integrity, inconsistent, incompetent, disloyal, or unfair. Their perception and interpretation, based on your actions, will compromise your ability to get things done. It will also interfere with workplace relationships and may become a roadblock to career advancement.

To assess yourself on the 12 Dimensions of Trust, download this free tool from People First Productivity Solutions.

Trusting Co-Workers Don’t Want to Let Each Other Down

Here’s one more reason to prioritize follow through. You don’t want to let people down. Maybe you’ve never thought about it this way before. But when you fail to follow through, you’re disappointing others who counted on you.

Strong workplace relationships, founded in trust, are important. They’re also fragile. Recognizing the fragility and importance of these relationships will help you view your follow through differently.

Don’t make this mistake! It’s a common one, and it’s completely avoidable.

When there’s a strong relationship and mutual trust, it’s easy to take the other person for granted. You may figure that they know you well and will be understanding when you slip up. When they’re accommodating and tolerant, you figure it’s no big deal to them when you don’t follow through. You figure it’s okay to be lackadaisical with your follow through. You end up deprioritizing deliverables to this individual because, you figure, they won’t really mind.

Over and over again, in small ways, you disappoint this person. They begin to say things like “Oh, that’s just Tom…” and you receive that as a sign that they “get you.” You take it as permission to behave badly and continue not living up to your promises and commitments. Soon, the disappointments are more frequent and not as small. They add up. And the other person gives up on you.

You trusted that they’d give you the same free pass forever. They trusted that you’d care enough to stop taking advantage of their good nature. You’re both feeling mistrustful once the relationship impacts come to light.

To preserve and protect relationships, don’t take your colleague’s trust for granted. Don’t develop a reputation for being last-minute, late, unreliable, inconsistent, or lacking commitment. Instead, live up to the promises you make and follow through on your commitments.