08JulThe Soft Skills You Need for Leading Employees through Change

Have you been tasked with leading employees through change in any of these ways? 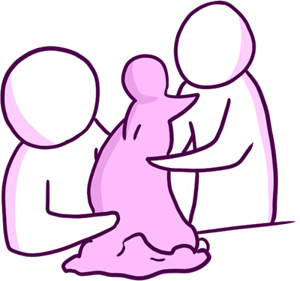 If you are a manager, chances are that you recently have or soon will oversee changes in most – if not all – of these ways. Change is the only constant. The only place you don’t get change these days is from a vending machine. Change either happens to us or is driven by us. The inevitability of change is something every manager must deal with.

All those platitudes about change don’t make it any easier. Honing your soft skills can make it easier, though, to lead change.

How Soft Skills Make You a Better Change Leader

As you read these definitions of change, notice how they make you feel.

Change is “any significant difference from what was before.”

Change is “a disruptive, prolonged event that represents a departure (in whole or in part) from the status quo.”

Change is “to make the form, nature, content, future course, etc. of something different from what it is or from what it could be if left alone.”

Change is “to become something different; to become altered or modified.”

How do you feel? Vaguely uncomfortable? Slightly agitated? A little apprehensive? Somewhat defensive or braced? Or maybe you feel curious, even a bit excited by the possibilities.

The point is that you feel something. Change is like cilantro – you either love it or you hate it. Most people, even when the change is positive, experience emotions that are negative. Dread, fear, grief, skepticism, overwhelm, and irritation are all common responses to change.

That’s because humans, generally speaking, prefer homeostasis. That’s a state in which a person’s relationship to their environment is stable. In other words, it’s human nature to dislike and even resist change.

So what’s a change leader to do? If people don’t want change, don’t like change, are wired to resist change, and have negative emotions even when the change is positive… how can you be more successful when introducing and ushering in change?

Effectively leading employees through change requires using soft skills. There’s no way around it. When managers attempt to mandate change and rely on their authority, change becomes more painful than it needs to be for the organization or team.

Think about any workplace situation where change was announced but never came to fruition due to pushback. If you dissect that situation, you’ll recall some of these change derailers were in play:

Each of these ten change derailers would have been avoided if change leaders had been empathetic and had communicated differently about the pending change.

Empathy Is Essential for Leading Change

Before you can change direction, you’ll have to slow down. You may even need to come to a full stop. Trying to round that corner too quickly or cross oncoming traffic is dangerous and foolish. You won’t get there faster by stomping on the accelerator and ignoring hazards and common sense.

People need time to process change. They need time to make a break from the way things used to be. It needs to be okay for them to slow down as they adapt to new ways of doing things. Unless this is built in to the transition between what was and what will be, there will be accidents and injuries.

Empathizing with people during a time of change starts by understanding the change response and why change is so difficult. Knowing how people process change will cause you to implement change differently, in a way that actually accelerates adoption.

The change response has three rapid-fire phases. First, we perceive that a change is happening, then we have a response that is initially emotional, followed by a reaction that is usually protective.

Of the three phases, the only one we can see in others is the outward reaction. It typically happens within seconds of learning or realizing that a change is imminent. That protective response occurs even when the emotional response is positive. This is why some of the happiest life events (new job, new home, getting married, having a baby) are so stressful and come with mixed feelings.

In the workplace, perceptions and emotions often remain hidden. We don’t see those displayed because they are the internal fuel for the outward reaction – the expression of the emotion, for example, that sounds like resistance or negativity.

When managers announce change, they often expect immediate support and adoption. They forget that others need time to work through their change response. They’ve forgotten that they, too, had an initial perception, emotion, and reaction that might not have been all positive.

Something to keep in mind is that you’ve had a lot more time to process change than what you’re giving others. You had an idea or were asked to participate in solving a problem. You attended meetings to discuss this, did work to evaluate the options, and staged the roll out for this change. It’s been weeks or months since you first perceived a need for this change. You’re much farther along than members of your team who are learning about this for the first time.

It would be unrealistic and unfair to expect people to instantly catch up to you. They need time because change (even good change!) is difficult to accept.

Change is difficult because:

Knowing that people will be experiencing doubts and difficulties like these means you can empathize with them. Letting people voice their apprehensions and showing your empathy goes a long way. Understanding what they’re experiencing will help them process change faster.

Before people can get to the new beginning the way you want them to be, they must first come to grips with the fact that something else is ending. Depending on how attached they were to the way things used to be, they may experience a sense of loss. You can expect this to be more pronounced if someone had pride of ownership in what you’re replacing.

Gradually, people move into a transitional phase where they are still apprehensive but are past the initial shock and sense of loss. Eventually, they are able to get on board with the new way of doing things. Your job, as a change leader, is to help them move through these phases without pushing them into an artificial state where they playact adoption but harbor negative emotions because they didn’t get a chance to work through them. 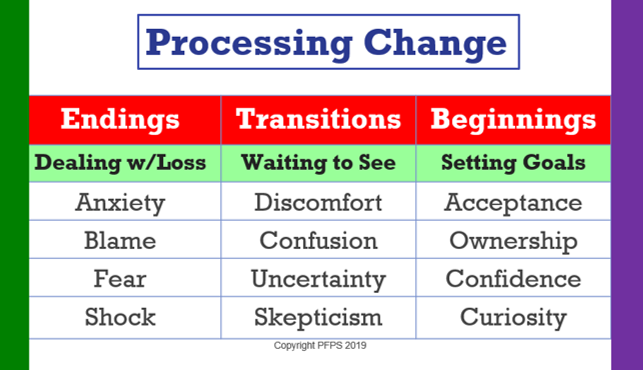 Empathy will help you implement and accelerate change. If you can view these feelings as natural and acceptable, you’ll respond differently than you would if you believe people should make overnight change because they’re required to do so.

Rather than denying or disallowing the emotions listed in the table above, be open to discussing them. You may even be able to relate to them if you hearken back to what you experienced at the onset of this change discussion.

Implementing change with empathy doesn’t mean you are giving people a free pass to avoid making a change. You’ll have both an expectation for change AND an understanding that making this change may be difficult.

If you ask yourself these seven questions before introducing change, you will embed an empathetic response into that introduction. You’ll also be prepared to alleviate the discomforts of change. The earlier you consider these questions, the more successful you will be in accelerating it.

Having considered those questions, there’s one more way to get prepared. It, too, involves soft skills.

Communication is critical in any change. You’ll listen with empathy. You’ll also invite input and listen to diverse points of view as you determine your course of action. When it’s time to announce a change, you can use this 4-part formula for communicating clearly about change.

What happened to cause the need for this change? What will happen if a change is not made? Why does this matter? Give the background information. Talk about the alternatives that were considered. Paint the picture of what this change is supposed to address and accomplish.

What emotional context is there? Show empathy as you dignify emotions that others may be having. Let them know you understand the sense of loss, disappointment, surprise, concern, or other emotions they may be feeling. Make it okay for emotions to be talked about. That way, people will talk about them and process them openly so you can continue monitoring and supporting them.

If you don’t acknowledge emotions, they’ll still be experienced. You’ll just look like an unfeeling autocrat or someone with their head stuck in the sand. If you try to suppress or ignore emotions, people will be more likely to resist the change even if they understand it rationally.

Part 3: Talk about the known and unknown effects.

Be honest about how this will impact those involved. Don’t paint a “blue sky” picture that makes you seem out of touch. Be realistic about the time frames you outline and the steps toward the change. If there are some unknowns, don’t pretend to have the answers. Instead, let people know that you’re prepared to take one step at a time and to make adjustments as new challenges emerge.

Your credibility is going to help people move forward with you. As a change leader, don’t leave people behind because you didn’t seem to look at how they’d be affected. Remember that they can’t believe in the message until they believe in the messenger. You need to be honest, transparent, and forthright in discussing what will happen as a result of this change.

Part 4: State your needs and expectations.

Once you’ve described the situation, acknowledged emotions, and discussed the impact, it’s time to state your expectations. Tell people the outcomes you would like to see. Be clear.

This is where most managers begin. They leap straight to this step without doing the soft skills work in steps 1, 2 and 3. If you state your needs without paying attention to others’ needs, you’ll be inviting backlash and resistance. It’s the natural human response, not some reflection of your team members’ dedication or work ethic. It’s only natural for them to have emotions and questions about why to make the change and how it will affect them. Anticipating and accepting what’s natural is smart leadership.

As you’re leading employees through change, don’t get impatient. It will take time. Don’t get annoyed at their progression through endings and transitions. They need to work though that change process so they aren’t encumbered by lingering emotions and resentments about the change.

With genuine empathy and open communication, you will be more effective in getting to those new beginnings sooner.

If you want some hands-on practice in leading change, sign up for our online training Workplace Conversations. Work at your own pace, and learn the skills you need to lead change, communicate better and hone your soft skills.