Being Effective As A Leader

Everyone is a leader. This post is written for titled senior leaders and for informal leaders who influence others by virtue of their charisma, expertise, status or perceived strength.

We all lead others in some aspect of our lives. We set examples, teach, model behaviors, parent, mentor, or share our opinions. In everything we do, there is a chance that someone is watching and may be following us. Whether we sign up for it or not, we lead.

When we’re leading on purpose, we have a responsibility to others. When we know others are following us, we have that same responsibility. If you don’t want the responsibility, stop leading. If you do want it, start leading deliberately before you inadvertently take people to the wrong places. Either way, be aware that you are a leader and that being a leader has implications that are bigger than you.

For those who want to lead well, there are countless resources you can turn to. Despite the proliferation of books, seminars, articles and research related to leadership, a nebulous question remains. What does it mean to be a good leader?

I’m not going to tackle that question. It’s too big. But I do think I can offer some insight on what it looks like to be an effective leader. I’ll define “effective leader” as someone others want to follow because they see their own needs being met when they follow. Paramount among the needs effective leaders meet is that they help others grow into leaders, too. Effective leaders are focused on empowering others rather than wielding their own power.

In the chart below, you’ll see six indicators of leadership effectiveness listed in the left-hand column. Each row offers 4 perceptions about how others view leaders, depending on their actions. 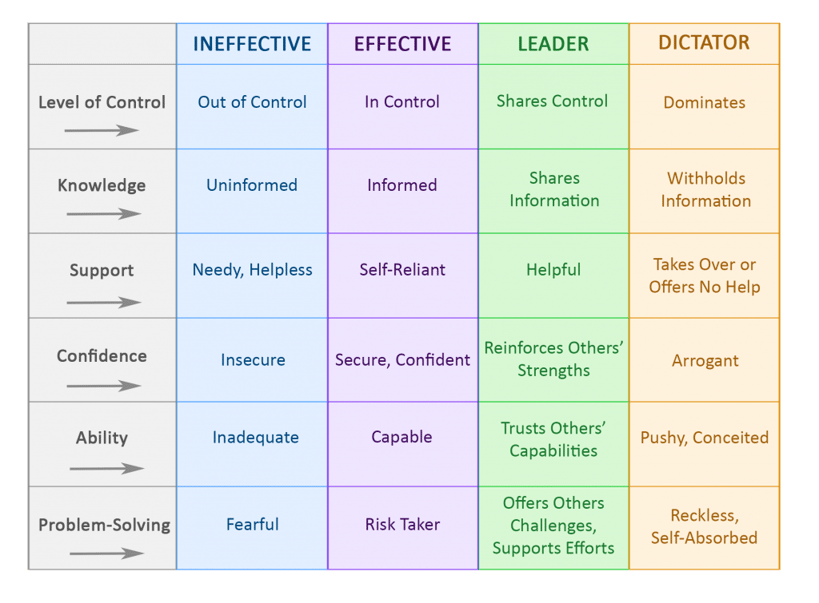 People who rely on behaviors and emotions in the blue column are perceived as being ineffective. They do not describe themselves as leaders, and they do not typically wish to put themselves in the role of a leader. Even as parents, they may not see their role as one of a leader. In their opinions, taking charge would be more negative than positive.

People who are skilled technicians in the work they do exhibit the behaviors and emotions in the purple column. They are effective in what they do, in their own work. They may think of themselves as leaders because they are very good role models. When others choose not to follow them, they seldom know why that is. What they are missing is shown here by the contrast of the green column.

The green column captures the behaviors and emotions of leaders in these six indicators. While we would be happy to have someone on our team who is “in control,” we would strongly prefer to follow someone who is going to “share control.” The extra steps taken by leaders ensure that the needs of followers are met, including the need for followers to learn and grow so that they, too, can become leaders.

The far-right hand column, in orange, shows the hyper-extension in these six indicators. When people go too far, it is usually a “power play” that they confuse with leadership. People exhibiting behaviors and emotions in this column are relying on authority rather than the ability to influence or inspire others. They are focused on their own agenda, not on the needs of others. No matter what their title, these are people that no one wants to follow.

As a leader, it’s imperative to understand why and how to show ever person that you care about them. Learn more about how you can CONNECT2Lead. And be sure to subscribe to the CONNECT2Lead Blog for weekly tips and techniques on leading with a people first approach.