Coaching vs. Mentoring: What’s the Difference?

There are so many reasons to offer both mentoring and coaching in your organization… Unfortunately many fail to offer both because they think it’s all the same. It’s not! Read on to understand the differences and the value of each when it comes to coaching vs. mentoring.

The number one reason to offer both mentoring and coaching is to retain and develop people. It's not as easy as it used to find fully developed talent to bring into your organization. If you’re not able to find talent… and you’re not developing talent… you won’t have the talent you need to succeed long term. 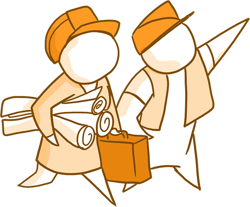 What’s more, you’ll lose the talent that you already have. People want, need, and expect employers to invest in them. They’ll seek employment elsewhere if you don’t give them learning and development opportunities.

This retention issue is no small matter. There's an increasingly competitive job market. That’s why 93% of executives are highly concerned about the lack of leaders who are being developed (source: HCI survey). In studies like the annual report from HCI, employees say that one of the top reasons they leave an organization is that there are limited opportunities for them to grow.

Both problems – talent development and retention -- are solved with mentoring and coaching.

The first known use of the word “mentor” was in its Greek form in The Odyssey, way back in 100 B.C.. In The Odyssey, there was a loyal adviser to Odysseus. (Odysseus, remember, was on the great journey, called “The Odyssey”.)

As Odysseus prepared for his journey, he entrusted the care and education of his son, Telemachus, to this loyal advisor. In ancient Greek times, this was common practice. It was customary for boys to be paired with older males who were chosen by the boys’ fathers. It was a great honor to be chosen for this role. The criteria for selecting this older male  was that that he had values and an example similar to what the father would provide.

So, Odysseus selected his own advisor to serve as a guardian and role model to his son. The advisor’s name was Mentor. And what we see in this story is an excellent example of mentoring.

Those ancient mentoring relationships were based on a fundamental principle of human survival. As humans, we learn skills and culture and values directly from other humans that we look up to and admire.

Similar examples of modeling and mentoring are found throughout history. In the Middle Ages, craft guilds were set up to structure the professional development of merchants and lawyers and goldsmiths and so on.

In those craft guilds, you’d find an apprentice who worked with a master. The master was considered excellent in the given trade. The apprentice worked and lived with the master, working up to a journeyman level and eventually becoming a master in his own right.

In early industrial societies, mentoring showed up more like we define it today in employer/employee relationships.

At that point in time, mentoring was no longer a priority because long-term development of employees, was no longer the focus. When it occurred, mentoring was a more informal arrangement, often initiated by the mentee. We can find lots of these examples and partnerships! George Washington and Alexander Hamilton… Ralph Waldo Emerson and Henry David Thoreau… Diana Ross and Michael Jackson… just to name  few.

Without formal structure and universally accepted guidelines for mentoring, the label gets slapped on a lot of activities that aren’t truly mentoring.

To sort it all out, let's talk first about what it isn't. Mentoring isn't like it was in the craft guild days, restricted to a single mentor with a single mentee.

And it's not even necessary for it to be the older, wiser mentor with a young new mentee. This is no longer modeled after Mentor and Telemachus. Mentoring doesn't have to be long term, and it shouldn't be parental.

Mentoring, instead, has many variations that can be successful in delivering desired outcomes for developing and retaining employees.

There’s no hierarchical relationship needed for mentoring. In fact, mentors need not have any positional power relative to mentees. Younger people can (and do!) mentor older people.

Coaching is not the same as mentoring, and employees should have access to coaches who aren’t also their mentors. Trying to make a single individual both coach and mentor (and sometimes also manager and trainer!) guarantees that the employee will not get a full helping of both coaching and mentoring. They’ll get one or the other, depending on the person in the role of coach/mentor.

Business coaching isn’t the same as athletic coaching. The term “coaching” is derived from the old English word which meant “carriage.” Back in the day, a coach was a vehicle (also called a carriage). The word “coach” was first applied to humans as an insult. At Oxford, “coach” was a derogatory nickname for a teacher who carried a student rather than challenging the student.

In the word’s evolution, there was a similar Latin word that meant “to extract.”

The word “coach” evolved to its current meaning – one who supports another by extracting individual thought, reflection, self-discovery, goal-setting, and action planning.

Coaches ask questions to help people think through problems and cross apply what they already know. Coaches facilitate goal setting and build commitment by getting people to make their own self-determinations about how they’ll achieve their goals.

Coaching, according to Tim Galloway, author of The Inner Game, described coaching as unlocking people's potential to maximize their own performance.

Coaching vs. Mentoring: a closer look at the differences

Sir John Whitmore, the pioneer in business coaching, says coaches see every individual as an acorn. Inside each of us acorns is already the potential to become a mighty oak tree. It's already there. We just need to be nourished and encouraged and exposed to light so we can grow into our full potential. By contrast, mentoring is a construct that sees every individual as an empty vessel into which knowledge can be poured.

4. In the workplace, mentors are usually tasked with helping people learn something specific that will benefit the business. Coaches help people learn about themselves and tap into unrealized potential.

5. Mentors can be deployed at a moment’s notice. Anyone can be a mentor. Coaches need training and skill development. Not everyone can be a coach.

9. Everyone is mentorable. Not everyone is coachable. Mentoring can be delivered without active participation by the mentee. With coaching, nothing happens unless the coachee engages.

10. Great mentors have a wealth of hard skills in the realm where they are qualified to mentor others. Great coaches rely on soft skills like emotional intelligence, listening, and critical thinking.