Ever notice how leaders aren't self-oriented? The most admired and most effective ones are just the opposite.

Other-Orientation is very important. I 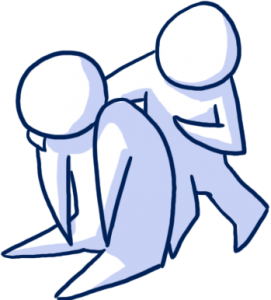 n a society that celebrates individual achievement and signals that you “have to look out for #1,” it isn’t always easy to stay tuned in to the needs of others. But strong leaders rise above that temptation. These leaders aren't self-oriented despite the societal mores that would seem to suggest that's okay.

In the workplace, high achievers often struggle when they reach a turning point in their career where they no longer have the capacity or broad enough control to succeed on their own.

Some companies do offer manager training in those critical skills. Even then, some new (and not-so-new) managers fail because they are not other-oriented. The skills related to managing will never be correctly or effectively implemented unless the manager can step outside himself or herself to consider the needs of others.

It Extends to Other Areas: At Home, with Friends, in Groups..... Leaders Aren't Self-Oriented

This same principle applies outside the workplace. Parenting requires a shift from “me first” to “you first” and a balancing act that considers the needs of others throughout their lives.

It’s true, too, for friendships. The old maxim “they don’t care how much you know until they know how much you care” comes to mind. Sometimes, friends set aside their need to offer solutions because they recognize that the other person’s need is just to be heard and understood.

Societally, we don’t talk much about orienting ourselves to others. But people who never do that may become downright narcissistic, constantly pursuing individual glory and clamoring to take credit. They do not have an interest in others just for the sake of others.

Without a healthy other-orientation, you can’t (or won’t want to) develop active listening skills, openness to critique that helps you grow, empathy for others, an ability to coach and support the people who depend on you, or an ability to gracefully accept even minor defeats.

Instead, a lack of other-orientation will cause you, over time, to seem arrogant and condescending. It will be a barrier to forming deep, meaningful relationships. And it will hold you back from achieving to the level of your full potential while also holding back the people around you. Why? Because the best leaders aren't self-oriented.

Since Leaders Aren't Self-Oriented, Here's How to Make a Shift and become More Other-Oriented

To work on developing an orientation to others, consider first the benefits you will experience if you become more aware of and attentive to the needs of others. But don’t stop there! Next, consider what it means to you when others give you the support and understanding that helps you in various situations – if you did the same for others, it would mean something similar to them.

Finally, reflect on what prevents you from adopting an other-orientation more frequently. Is it a fear – that if you don’t put yourself first, no one else will? A concern that you just don’t have the time? Or maybe a belief that it would be inappropriate somehow to demonstrate an interest in the needs of others?

Whatever the barriers may be, weigh them against the benefits – to you and to others – that could occur if you were more cognizant and considerate of others’ needs. Your success, long-term, depends on others so orienting yourself to them is, after all, a smart strategy, too.

Deb Calvert is the president of People First Productivity Solutions and has worked with more than 50 companies to develop and deliver leadership training programs. Deb is a Certified Master with The Leadership Challenge® and is certified as an Executive Coach. Book Deb today to speak at your leadership events, and subscribe to our blog for weekly articles on how to improve your leadership skills.