Posted at 08:00h why wait to be great series, 08:00h difficult converations by Deb Calvert

Have you been dodging a difficult conversation? The kind of conversation that may be uncomfortable, in a situation that you wish would just take care of itself? Are you dancing around a subject, being less direct, less candid than you really should be because you fear conflict or don’t want to hurt someone’s feelings? 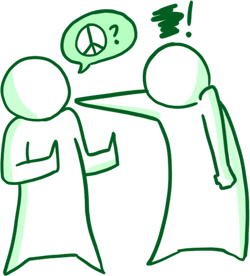 As a result of not being candid, that situation will stew and brew until it erupts and causes more damage than necessary. It’s only a matter of time before one of you gets so frustrated by what’s unspoken that   things that shouldn’t be said will be. Instead, just a candid conversation about what needs to be discussed.

I get it. Emotionally, you’d rather risk playing hot potato with that ticking time bomb. It seems less risky than having THAT conversation. I’ve felt the same way at times. You’ll have to weigh the stakes of speaking up vs. letting this one fester. Just don’t wimp out if the stakes of doing so are greater than those few moments of discomfort required to initiate the candid conversation.

To improve personal effectiveness, we’ve got to examine the root of the problem: why we aren’t direct with others. That’ll make it easier to understand the importance of being candid and how such a conversation should sound -- with people at every level of the organization.

Why Are You Dodging Difficult Conversations?

There are so many rationalizations for dodging difficult conversations! I’ve probably used every conceivable one myself! These are some of  the most common causes for people to have reservations instead of having conversations. Chances are you’ve noticed yourself making at least one of these excuses, and (in hindsight) you’ve probably seen how this has compromised your effectiveness, too.

Some people are intimidated by authority or people who push back. In uncomfortable situations, they may say whatever ends the conversation most quickly or they may choose to avoid these kinds of conversations altogether. Anger or other strong emotions may be in play here, too.

Some folks are overly concerned with their popularity. Do you find that your need to be liked takes priority over the needs of others who could benefit from your feedback?

Some soften or completely avoid harsh truths because they don’t want to hurt the other party’s feelings. While a noble thought, it’s still not a good excuse for being indirect. How can people improve if you’re not helping them to learn from their mistakes?

Sometimes people can’t determine the best way to proceed or are afraid of botching the conversation. In avoiding risk and procrastinating due to a fruitless pursuit of perfection, they fail to make any decision until it’s too late.

Are you hearing what’s really being said, or just smiling and nodding? Are you forgetting to show empathy and prompt the person with follow-up questions? You can’t be fair in a candid conversation if you aren’t a full participant in two-way dialogue.

It’s easier to accept candid feedback from people we trust and from people who trust us. Establishing workplace trust -- up, down, and across the organization -- sets you up for success in other ways, too. If you’re not feeling comfortable in candid conversations, consider what work might need to be done to build 2-way trust with the other party.

For some, the risk may seem too high for “telling it like it is.” Fear of retribution, whether minor or serious, may exist. Whether real or perceived, this fear can impede the progress of entire teams.

When you’re speaking with higher-level managers, you may feel it’s not “your place” to speak the truth or share what’s on your mind. You may even feel that your opinion is not worthy, valid, or wanted. Before you assume this is the case, test the waters. You might be surprised as how eager others are to hear your perspective.

Tips for Being More Candid

Being candid is not permission to be brusque, inconsiderate, or mean-spirited. The purpose of candor is clarity and collaboration. If you’re triggering emotional responses, you’ve probably gone overboard instead of being matter-of-fact.

When being candid, you can defuse emotional responses and be more effective when you use these tips:

If you’re finding that it’s hard or if you’re still dodging difficult conversations, keep working on it! You’re doing no favors by making other people guess or work for the truth. And you’re chickening out if you task someone else with passing along your feedback to other people. It’s got to be you.

How the Conversation Should Really Go

Sometimes, when attempting to be candid, you have to fight your body’s instincts to do otherwise. Muscles may tense. Your facial expression may change. With practice, these involuntary reactions should lessen.

Fortunately, you can prepare yourself for a candid conversation with a few simple steps:

In the end, the other party should “get it” and even respect you. They will if you effectively communicate why what you’re saying matters and how the team (and the individual, too!) will benefit from a change in behavior.

Here are the red flags to watch for in your conversation. You’ll be straying from candor and moving into unproductive emotionality if:

With these tips, you should be able to reach a mutually agreeable resolution in difficult conversations. That said… resolving a conflict does not mean you have to meet in the middle. In the end, being effective sometimes means doing what’s right despite others’ dissatisfaction with your actions. Be sure to read our previous post about assertiveness in the Why Wait to Be Great? series!

When you’re experiencing self-doubt or second guessing the wisdom of being candid, look bigger picture and longer term. What feels bad today may be justified and appreciated more in the future. Doing what’s right is often not the same as doing what’s easy.

Bigger picture and longer term will also help you strike a balance between the emotions you’re experiencing and the rational thought process that might be getting swamped by those emotions. Take a deep breath and ask yourself these questions:

You already know the answers! Now, take a deep breath and go have that difficult conversation. Be candid. Be objective. Be focused on the long-term and the mutual benefits. You’ve got this!

Topics: why wait to be great series, difficult converations