The Role of a Leader in Reducing Information Overload

If you’re not part of the solution, you’re part of the problem. The role of a leader inevitably includes being a solver or an enabler so others can solve problems in the workplace.

That’s why we can’t shoulder shrug away insidious problems even when they’re part of the everyday grind. Sure, information overload is prevalent and sorting out the facts is becoming increasingly difficult. But the universality of that feeling doesn’t exonerate leaders from addressing it. 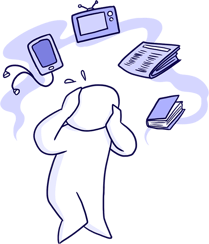 There are five proactive measures you can take to reduce information overload:

We’ll take those in reverse order to lay the proper foundation and then focus on the facts and truth.

If It’s Lonely at the Top, then You’re Doing Something Wrong.

The role of a leader has absolutely nothing to do with isolating yourself in an ivory tower. That misperception is a dangerous one!

Gandhi had the right idea when he said "I must follow the people. Am I not their leader?" Expecting people to follow you is unreasonable if you’re out of touch with them and have no idea where they want to go.

Information overload is easier for employees to push through when they know they’re respected and valued. With purpose, engagement, and context, they are less likely to waste time with the wrong information or the wrong sources in an effort to overcome gaps in their relationship with you. No one should have to guess at what’s important to you or what kind of information you prefer. Rather than issuing edicts about the quality and quantity of information you need, set an example and transparently share what you’re looking for and expecting from others.

Dignifying others provides clarity as you form relationships and demonstrate what you value.

You can also provide clarity by identifying what’s important in your organization, what matters most to you, and what you want most from the various functions and people in the organization. This clarity needs to be evident in all you do, with no mixed messages or competing priorities to confuse others.

Avoid celebrating ambiguity. The competency “deals well with ambiguity” is a cop out. Without realizing it, you’re shifting the burden to employees. Instead of being clear and minimizing ambiguity, you may be counting on that competency to make your job easier. It won’t.

Where there’s ambiguity, there’s information overload. It comes in the form of too many meetings where problems are rehashed but never solved. It comes from endless second guessing and never-ending quests to get more information. And it rears up again when mistakes are made, rework is required, or unfinished business suddenly becomes urgent.

That’s all wasted time and misspent effort. You can spare your team by simply being clear and setting expectations related to what’s most important. That will eliminate a lot of information overload and free people up to do work that’s far more meaningful and dignifying.

The Role of a Leader Isn’t Advocacy Alone. Leading Requires Objectivity, too.

People who put advocacy over objectivity operate in much the same way. They say what people want to hear. They drum up emotions to prey on people’s feelings. They cloud rational thinking with propaganda tactics, character assassinations, and half-truths. They want worshippers and sheep-like followers, and they aren’t working to build others up as leaders in their own right.

Real leaders see value in maintaining objectivity and rely on sources that strive to be objective by providing multiple perspectives without a slanted view. These leaders want to understand all the angles and seek out a diversity of thought. They know that the best decisions come from inviting in more voices and ideas, not fewer.

To be genuinely inclusive, leaders have to be as objective as possible. Otherwise, their unconscious biases will inadvertently cause them to overlook valuable input. Advocacy, by its very nature, suggests there is only one worthy course or pursuit. That’s extremely self-limiting.

It may seem counter-intuitive to say that coping with information overload includes bringing in more voices and deliberately seeking more perspectives. The risk of not getting enough information far outweighs the benefits related to ignoring important information. What’s more, focusing on breadth of ideas vs. depth of echo-chamber assurances will minimize the amount of information needed. Many information overload is a by-product of bolstering one’s own pre-conceived ideas.

Facts are known to be true and indisputable. They have been proven. There is no debate. A fact is a fact. The opposite of a fact is an opinion. And opinions can be disproven.

Opinions are based on feelings or personal experience, whereas facts are based on evidence. There are four different kinds of facts:

Facts can change and be disproven. What makes them facts is that, in a given moment in time, there is no evidence against them (it may come later, but it’s not available to us now).

It's that universal acceptance that makes them a fact, rather than an opinion.

The problem is when people DO have access to evidence that dispute “facts” but choose to ignore or suppress it. Ignoring information we don’t like or don’t want doesn’t make it go away. It doesn’t strengthen the “facts” you’re presenting to omit information that disputes them.

By contrast, ignoring other facts demonstrates your own lack of objectivity and erodes your credibility. This will come back to bite you because facts always rise back to the surface. Your best course of action as a leader is to acknowledge and understand both sides of an issue and then to objectively sort out the facts from the fictions.

When you take the lead to pursue facts, you’ll be modeling this for others and be teaching them a strategy for dealing with information overload. When you question information to discern whether or not it’s factual, you’ll also be setting the standard and cutting through a lot of clutter.

Ultimately, People Look to Leaders for the Truth

The dictionary definition of truth includes words like verifiable, indisputable, absolute, factual, the state of being true… But that's not really how we used the word truth. At least not in recent years.

I frequently hear terms like my truth, her truth. But let’s face it: There's only "the truth." One, singular truth; not multiple truths. The very nature of truth is that there’s something absolute and indisputable about it. Why does this matter?

I think it matters because if "my truth" is different from "your truth,” what we're really talking about are beliefs. While we should certainly respect each other's beliefs, a belief is not the same as a truth.

To be clear: We shouldn't impose our own beliefs on other people. We shouldn't expect everyone to have exactly the same beliefs. We should, however, expect truth to be the absolute. The standard by which we all can see and know that it's the same, because it's a fact.

Here's an example. My husband runs hot and I’m almost always cold. When we enter a room, he’s likely to say “wow, it's hot in here” and turn on the air conditioner. Well, the truth is that he believes it's hot. He's experiencing a sensation of it being hot. But that’s not absolute truth. In that same room, at that same moment, I’m cold (maybe neutral, but never hot!). He’s feeling one way, and I’m feeling another. Neither of us is entitled to claim our feeling as an absolute truth though.

When we operate as if something that we’re feeling is the absolute truth, we’re ignoring or minimizing what other people are experiencing. We’re acting as if our own beliefs are more important, more valuable, or somehow elevated about the other person’s. That’s not dignifying others!

Saying it’s “my truth” that this room is cold plants a stake of absolutism. It closes off discussion because it doesn’t allow for alternate perspectives. Instead, it demands that others respect me any my strongly held belief. It’s a manipulation to speak of truth this way rather than using perfectly good, accurate terms like “feelings” or “beliefs.”

What we believe, what we feel, what we experience… these are all valid and important. But they are not the truth. Our beliefs, feelings, and emotions are relative and personal and changeable. Truth is none of those things. Truth is universal and solid.

Truth is what people want from leaders they trust and follow.

The role of a leader is to be a truth-teller. At the same time, leaders must also respect others’ beliefs and feelings. But a leader who over-indulges “his truth” and “her truth” and every nuance of interpretation is a leader who won’t be trusted.

The leader who accepts an infinite number of variations to the trust and accommodates every individuals’ own personal truths may be well-intended and well-liked. But that same leader will be seen as weak and non-committal.

That leader will be creating and indulging unnecessary ambiguity and conflict. And that leader will confuse people because without the truth, there will always be doubt.

Truth is special. It gives us common ground because of its absolute nature.

Strong leaders seek the truth, tell the truth, and hold others accountable to operating within the common reality, too.