Posted at 08:00h why wait to be great series, 08:00h assuming good intent by Deb Calvert

As we wrap this series, Why Wait to be Great?, there’s one more aspect of personal effectiveness we need to talk about candidly. Too many intelligent, capable, talented people get consumed by hyper-focusing on what others say and do. To liberate yourself from these unproductive drains and make every day easier, start by assuming good intent.

Assuming good intent means giving people the benefit of the doubt. It means starting with a belief that what they’ve said or done was motivated by a good purpose. It means looking past the way you perceive or interpret something negatively, instead assuming that the sender meant well or tried their best.

What Gets in the Way of Assuming Good Intent

We’d all like for others to assume good intent about our actions. When you fired off that hasty email response, for example, you wanted people to assume that you were in a hurry and felt passionately about the topic. You didn’t want them to interpret what you said as mean-spirited or petty!

The reality, though, is that we’re naturally inclined to view others harshly and to excuse our own negative behaviors. This unconscious bias is known as the fundamental attribution error. Here’s how it works. 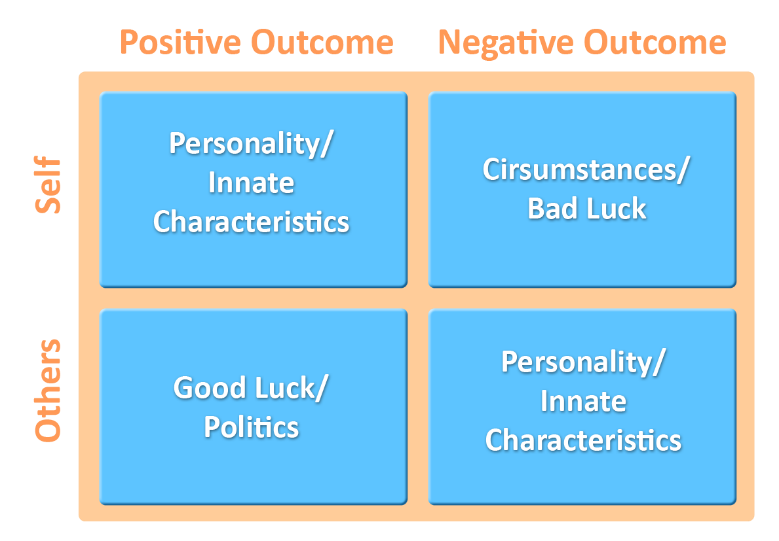 When others make mistakes or encounter setbacks, we attribute their misfortune to their personality or character flaws. We say things like “She’s too scatter-brained, so that’s why she didn’t get the promotion.”

Conversely, when we experience a setback or disappointment, we blame something outside of ourselves. We say things like "It's not fair. I would’ve gotten that job if it weren’t for the bad timing..”

In other words, we judge others by a different standard than we judge ourselves.

The fundamental attribution error is in play when there are positive outcomes, too.

If someone gets a promotion, the natural first response is often something like “Looks like she got lucky this time and played the game to get that job.”

But when its our own positive outcome, we typically think something like “I deserved this because I worked so hard for it and am the best person for the job.”

The illustration above shows this thought pattern and how the fundamental attribution error skews our interpretation based on nothing other than whether its us or its someone else in the situation.

To assume good intent, we have to move past this conditioned and automatic response. Just because you think it doesn’t make it accurate or useful.

The fundamental attribution error is response that excuses our own disappointments and affirms our own successes. Assuming good intent extends that same grace to others rather than portraying them in less favorable ways.

Giving Others (and Yourself!) Grace 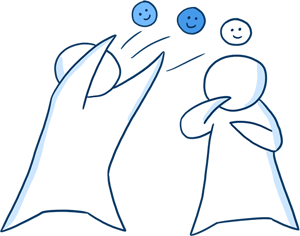 Grace, according to the dictionary, means giving favor or goodwill. It is a term in Christianity that includes the component of the recipient not being worthy of the favor granted, that the favor was not earned or deserved but was granted anyway.

Going with the broader definition removes excuses you might make when it comes time to give yourself and others grace. Acknowledging that it has not been earned and is not deserved liberates you to freely extend grace without doing the calculus about when, where, who, and how much to offer.

To assume good intent, you will have to give others grace – the favor or goodwill that is the benefit of the doubt.

Giving yourself grace is the best way to practice for extending it to others. If you are hard on yourself, you’ll more likely be too demanding of others. Perfectionism is one of the fastest ways to derail relationships and tank personal effectiveness.

To give grace, you’ll have to keep your fundamental attribution error in check. When you’re in rush hour traffic and someone cuts you off, you’ll immediately leap to conclusions about that driver’s flawed character and make assumptions about their intent. Full stop! Those thoughts are unfair and lack grace. Instead, extend the same grace that you give yourself when you accidentally commit a minor error in judgment when driving. These efforts are also good for building new thought patterns and habits.

When you give others grace, you’ll save yourself a lot of time and energy that would otherwise be wasted on indignation, vengeful thoughts, and hurt feelings. You won’t be causes relationship fractures. You’ll be more productive as you focus on the things that matter more.

Best of all, grace will be reciprocated. When you assume good intent, people will respond in kind.

The Foundation for Assuming Good Intent

These five starter beliefs will give you a better foundation for giving grace and assuming good intent.

1. We’re all different. Not good/bad. Not right/wrong. Just different.

The problem is when we fail to appreciate each other’s differences and, instead, judge each other based on those differences. My way is the only way, the right way, the best way… Conversely, you feel equally compelled to defend your way. That impasse limits us both.

2. People do what they believe is the right thing to do.


There aren’t many situations where people choose a behavior that they know is the worst possible choice. To them, in that instant, they do what they think is right or necessary.

Removed from the situation, of course, you might see it differently. You may have clarity, wisdom, experience, or bigger picture perspective that the other person lacks. Understanding that the deficit is in understanding and not in character may help you to intervene more effectively and/or to empathize.

3. There’s not much use in judging, blaming, or shaming.


Diagnosing the problem is fine. That’s how we’ll course correct and avoid making the same mistake again. But there’s really not much benefit in finger pointing, finding a scapegoat, or resorting to blame and shame.

When there’s a mistake or problem, it’s already in the past. Why dwell on something that can’t be changed? Instead, make sure that everyone involved has an opportunity to learn from the situation and knows what to do differently in the future.

4. We have common interests and goals.


Sure, we have lots of differences (and that’s good!). But we also have a lot in common. We share hopes, dreams, plans or goals. We share history together and have been through some stuff and survived because we had each other. We can relate to each other’s problems, share each other’s burdens, and be resources to one another.

Focusing on our common ground and mutual interests will get us a lot farther than nitpicking about our differences. When we succumb to divisions, our best bet is to remind ourselves about what we have in common and to unite in our shared goals.


We’re all stressed, busy, and doing the best we can. Usually, our negative reactions come from within – as we’re processing what’s happening in the moment, we’re calibrating it with all the other stressors we’re dealing with.

Stop taking things personally. If someone responds negatively, it’s more likely because they are reminded of something else or concerned about their current capacity. It probably has nothing at all to do with you.

When you can adopt these five beliefs and operate within them, everything is easier. With these five beliefs, you’ll routinely give grace to others and to yourself. You’ll assume good intent. You’ll be genuinely interested in what drives people to make the choices that they make. You’ll remain open to understanding, and you won’t reflexively respond with the unconscious bias of fundamental attribution error.

This makes you more effective. It makes you able to meet people where they are and to appreciate what they bring to the table.

Topics: why wait to be great series, assuming good intent