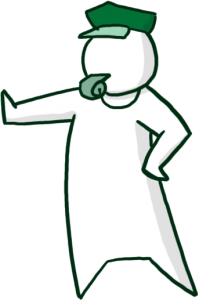 Excuses aren't leadership. Maybe it’s because the political season has seemed so long and drawn out. Or maybe I’m just wearied by some recent examples in my personal life. I’m sure my general impatience contributes, too. Whatever the factors may be, a new pet peeve has recently surfaced for me. I do not like to hear excuses.

Over the past few months, there’s been a constant stream of news stories reporting on politicians who are trying to justify, rationalize or excuse something they’ve said or done. Don’t they realize that the “explanation” often makes it worse?

This practice is becoming more common in everyday encounters, too. (Or am I just noticing it more than I used to?)  I recently had to replace my accountant because he would not take responsibility for blatant mistakes he made. I have a “three strikes and you’re out rule.” I don’t define a mistake as a strike. Instead, to me, a strike is a lack of accountability or a missed opportunity to learn from a situation. With my accountant, I had to move on after three situations where he didn’t do something in a timely manner and didn’t communicate to me about it. His latest excuse was, “Well, you’ve been in business for a few years now so you should’ve known.”

He may be right. Maybe I should’ve known. But the fact is that I was paying him to know and to tell me. His response to that was that I needed too much hand-holding. So I concluded that I’d made a mistake in hiring an accountant who isn’t willing to hold my hand on complex multi-state tax codes…and I found one who is.

Because this was our third go-round, I know the former accountant will continue to do business this way – taking no accountability for his own mistakes, shrugging off blame and arrogantly excusing his own behavior. I don’t need any more of that, especially because mistakes he makes can be costly for me. (Thankfully, his errors to date have caused us to be inconvenienced rather than financially drained.)

I’m not just talking about the big mistakes, though. The excuse-making pops up in little things, too, far too frequently. Little things where no excuse is needed, where the blame is inconsequential and yet people still seem to think there is a need for it. Here’s an example:

Recently, a flight delay required me to sprint through the Denver airport to make my connection (I did, but just barely.), and my checked bag didn’t make it home with me.  I explained to the airline’s baggage claim clerk that there was very little turnaround time between flights, but she was adamant that my bag must have arrived because there was no notification of a missed transfer. She was unwilling to consider that someone in Denver had made a mistake, or that she was making a mistake by keeping me 15 minutes longer, then 30 minutes longer, while she made phone calls and checked the empty carousel multiple times. When she finally gave me a claim ticket and voucher, setting me up with a way to pick up my luggage the next day and giving me the standard credit for that inconvenience, this is what she said: “With a 3-day trip, you probably should have packed light and avoided checking a bag.”

A simple, “We seem to be behind on our tracking and reporting. I apologize for your inconvenience and appreciate your patience,” would have left me feeling okay about the situation. But after getting the run-around, leaving me with a statement that attempted to shift the blame to me, well, that didn’t feel okay. It was unnecessary and a bit absurd. Frankly, no blame was needed. I just wanted to get my claim form and go home at the end of tiring trip.

Generationally, I wonder about the messages we are sending to our young adults and children. In an effort to protect their esteem, I think we may go too far in making excuses for them. I’ve heard more than one parent defend a child’s actions by making excuses or deflecting blame. If a child hears this over and over again, at what point do they begin to believe that they can do no wrong?

Here’s what I think we should be teaching people to think, say and do about this: Everyone makes mistake. This time, you made a mistake.  Now take responsibility for it. Learn from it. Move on. It ought to be that simple, but it isn’t. Is it because no one feels safe enough or strong enough to admit when they’ve made a mistake?

But everyone does make mistakes. Taking responsibility for mistakes made would go a long way in earning the respect of others. I appreciate and admire someone who can say, “I made a mistake. Here’s what I learned from it. Here’s what I’ll do differently the next time.” By contrast, I mistrust someone who says instead, “It’s not my fault. Here’s what happened (followed by convoluted and revisionist history) and here’s who you should blame instead of me (followed by finger pointing).”

If you don’t own it, you can’t improve it. When someone fails to take responsibility, they don’t learn from the mistake. That means they are likely to make the same mistake again. And again. As long as it’s possible to blame others and get away with it, some people will always deflect responsibility with excuses, rationalizations, justifications and circular logic. It’s unproductive. It’s unhealthy for relationships. And it’s self-limiting to do this.

Try this. Start with your own, private reflection on a situation where you know you made a mistake. Say, “I made a mistake.” Force yourself to stop there, but notice that your mind was racing ahead to fill in the “yeah, but.”  To own your mistake, you have to eliminate the “yeah, but” excuses or blame. You made a mistake. Accept it (because, frankly, it’s no big deal). Keep doing this for a few weeks. Then try it with someone else. Tell them when you made a mistake. Don’t add in any rationalizations. Just let the mistake stand on its own. If you want to add something, add, “Here’s what I learned and here’s what I will do differently next time.” You’ll be amazed at how good this feels and at how much more you are perceived as a leader.

Deb Calvert is a TLC Certified Master and expert on the evidence-based Five Exemplary Practices of Leaders. Book Deb today to speak at your leadership events, and subscribe to our blog for weekly articles on how to improve your leadership skills.