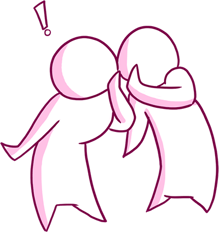 I have a blind spot. Colleague feedback on my recent 360-degree assessment showed me something I hadn’t seen or understood about myself before. Hmmm… If I’m being really honest, maybe I should rephrase that to admit I knew it… but I didn’t realize others knew it, too. And it turns out that there is an impact on them resulting from my blind spot and what I try (apparently unsuccessfully) to hide.

In this assessment, the Leadership Practices Inventory® or LPI®, observers rated the frequency of my behaviors in 30 key areas. Then they added comments in response to 5 questions about my effectiveness as a leader. What I learned from their comments is that they want me to be more vulnerable and to make mistakes more often and more visibly.

It’s true. They want me to mess up, to open up and to show them what I work so hard to hide.

After reflecting on this for a few weeks, I’ve moved past my initial reaction of denial. Now I’m in the stage of sorting out what this would look like if I were to reveal my mistakes publicly. Simultaneously, I’m also working through the fear associated with being vulnerable. Next week, I plan to stick my toe in the water and ask for some help in an area where I’ve never wanted to show weakness before. I hope I can find the nerve to follow through with that plan!

After the initial read, my process started with inner dialogue that ranged from “that’s just dumb” denial to “maybe I don’t have any mistakes to share” denial. Neither of those defensive denials felt good except for a fleeting moment. In my early career, however, I would have embraced those defenses and been stuck wallowing in them. Fortunately, I’ve learned that forward motion requires the humility to set aside that defensiveness and look for the truth in the feedback (even feedback I don’t like).

Knowing this, I was able to move to my next internal response “I’ve worked too hard and too long to be weak or show weakness.” In hindsight, I’m disappointed that this, too, was defensive. It didn’t seem defensive at first because it was disguised as justification. I rested on this one for several days, trying to convince myself that it was an acceptable response. As the child of two tough Marines, I think this response is one that I’m well-steeped in. Nevertheless, it didn’t give me the latitude needed to take my colleagues’ feedback seriously.

So I asked myself the question “what benefits would there be in publicly making or acknowledging my mistakes?” Yep, you guessed it… My first response was to think that there would be no possible benefits at all. I may be prone to a little stubbornness when it comes to letting go of long-held beliefs.

Then I asked “if there are no benefits, why would people I respect be telling me to do this?” Realizing that I trusted the observers I’d asked for feedback meant that I couldn’t deny they had my best interests in mind. Knowing and trusting that helped me over the hurdle (and may have been a baby step toward being more vulnerable).

Acceptance that there would be some benefit enable me to go in search of the benefit. In the safe confines of my office, I academically researched being vulnerable. (Another aha! in this – going to research before going to people felt safer to me.) What I learned from experts in this field like Brene Brown (yes, there really is field of study about being vulnerable) is this:

In that research phase, I also found a quote that provided some real clarity. Children’s author Madeline L’Engle wrote:

Armed with research and better understanding, I did take the next step (a vulnerable one) to ask people if this is what I needed to do, if I was on the right track. It is. One person said “It’s okay if you’re not ‘on’ all the time.” That permission was powerful. I will be working on being “off” sometimes.

I’m trusting that the benefits will reveal themselves to me over time. For now, the relief of not having to be everything I think I am supposed to be is benefit enough.

As a leader, it’s imperative to understand why and how to show ever person that you care about them. Learn more about how you can CONNECT2Lead. And be sure to subscribe to the CONNECT2Lead Blog for weekly tips and techniques on leading with a people first approach.