Team Lead Responsibilities Include Forgiving Others

Team lead responsibilities include forgiving others... so why is it so hard? After all, holding a grudge is like taking poison and expecting someone else to get sick. Withholding forgiveness from people who have hurt you doesn’t harm them. It harms you. So why do we do it?

I think it’s because it takes a lot of courage to take those steps of really, truly forgiving them. The risk of forgiving is that we might open ourselves up to being hurt again. So we wall ourselves off, building a defense that is made up of anger, resentment, bitterness and hate, all fueled by the lack of forgiveness.

We Neglect These Team Lead Responsibilities to Protect Ourselves 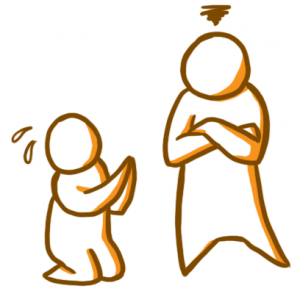 In doing so, we think we are protecting ourselves. To some extent, this may be true. You are protecting yourself from being hurt by the same person in the same way. But at what price? Is the new pain, created by the walls you’ve erected, even more damaging than the pain someone else caused?

What would it take to find the courage to forgive? To take down those walls and be liberated from the pain? And how can you do this without becoming too vulnerable again?

In the interest of full disclosure, let me point out that I’m writing this purely from a perspective of life experience, influenced by my faith and by my observations of others, not from the perspective of a qualified mental health professional. These are complex questions, and the answers I can provide here are going to be overly simplified for some situations. The principles apply even when the pain and heartache caused by others is devastating. But in those cases, forgiveness alone may be a starting point rather than a cure all. I’m offering this, even with those limitations, because this is one of the issues that surfaces most often in the executive coaching work I do. So I suspect there is a broad interest in this topic, and I know it influences the connections we make (or don’t make) with other people.

What It Looks Like to Own Up to Team Lead Responsibilities

To forgive someone means that you:

You’ll notice a few important things within these definitions.

First, forgiving is not the same thing as forgetting. You can forgive (as defined above) without forgetting what happened. By remembering without resentment, you can protect yourself from a repeated offense without having to build emotional walls. You can objectively recollect the facts of a situation and make future choices based on those neutral, non-emotional facts.

Second, there’s something to be said about how forgiveness of a debt implies that there is a debt that is owed. I’ve observed and personally experienced misunderstandings related to this aspect of relationships. Sometimes, people expect things from others that others are unable, unprepared or unwilling to give them. We make assumptions in our relationships.

For example, a friend may assume that you are always available. When you are too busy to listen to the latest, she might take that as a personal snub. She feels that you are not meeting your obligation and becomes hurt and angry.

Therein lies the misunderstanding. One party believes there is a debt to be paid, an obligation, while the other simply doesn’t see it this way. In this case, forgiveness would begin by erasing the perception of a debt. Moving forward, if both parties chose to do so, would involve clarifying what’s expected and then respecting those boundaries and feelings.

Sometimes, there is an actual obligation or debt. A promise is an obligation.  A loan is a debt. A marriage or a business partnership or a lease agreement with a roommate -- all of these imply that each party will respect the stated terms as well as the commonly understood terms. Marriage vows may not explicitly state that both parties will share the household and child rearing and income-producing activities, but this is implied and generally expected.

When someone doesn’t meet these obligations, resentment can build. But where does it get you if you cannot forgive those violations of the agreement? Obviously, severe transgressions may require dissolution of the agreement made, but even in those extreme situations, there is a case to be made for forgiving the unmet debt and moving forward.

One more aspect of this definition caught my attention. To absolve means to free another from guilt, shame or blame. Absolution, then, is the part of forgiveness that you give to another. It is possible to forgive without giving absolution. (You forgive for your own peace of mind.) Absolving another by saying “I forgive you” and making a way for them to be released from the weight of their offense gives them freedom, too.

Since this is separate from forgiving, I think there is an unbundling that can be helpful. You can choose to:

1. Forgive someone for something they have done.

By doing so, you release them from owing you anything (which, by the way, they may never have realized that they owe you). You would do this to liberate yourself from the resentment, bitterness or pain that comes from having that outstanding debt and feeling you were owed some sort of recourse.

2. Absolve someone in addition to forgiving them.

This would require letting them know that you’ve forgiven them.  You would do this to liberate the other party from any guilt or shame they may be feeling as a result of what they’ve done to you. Doing so might, for some, feel like a more complete process of forgiving. But there may be some wrongs that cannot be absolved, at least not yet.

3. Forget what someone else has done.

This would be a big step, one that is risky and bold. It would be done in the interest of starting fresh and in acknowledgement of someone’s commitment to do things differently.

Team Lead Responsibilities Include Courage, Too

Any and all of these steps require courage. Courage is not the absence of fear. Courage is taking action despite your fear. Courage gives us confidence and equips us for future challenges. When we demonstrate courage, we build bridges instead of walls because courage takes us to new places. Acting with courage is a choice, just like forgiving someone (or not) is a choice.

Any of all these steps also may require grace. Grace means showing mercy to give someone more than they deserve or to give them something that they did not earn. Why give something to someone when they did not earn it? Because doing so helps you by enabling you to move past a bad situation, bad feelings, and bad debts. Mercy is extended for your sake as much as it is for the sake of others. You know that feeling you get when you donate to a charitable cause? You do that for others, but you also do it because it makes you feel good. This is similar in that you will benefit through your giving.

Once you’ve forgiven someone, you may occasionally feel a recurrence of resentment or bitterness. When that happens, you may need to remind yourself that you have moved on. That’s really the whole point, to move on, so don’t allow yourself to get sucked back into that vortex of negativity. You started out with an aim not to be sucked into a situation someone else created, so the least you can do is give yourself that same liberty.

(Editor's Note: This blog was originally published in August 2016 and was recently updated.)