Information overload. An avalanche of misinformation. People counting on you to sort it all out. But how? Our series on infobesity, discernment, evaluating sources, and checking unconscious bias took us full circle – right back to the importance of critical thinking. By reader request, we’re wrapping up with a look at 10 essential habits you need to improve your critical thinking. 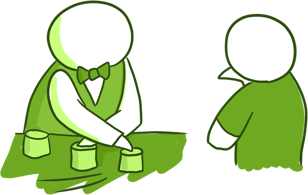 Grouped into four categories, these 10 simple habits are available to anyone who’s willing to work on them. Some may, at first, seem counterintuitive in the business world. Others may seem soft or inconsequential. There are even a few that may feel risky. But they’re all important for leaders who want to make better and more inclusive decisions.

Humility Will Improve Your Critical Thinking

Humility is often misunderstood. It’s not about being meek, subservient, or self-deprecating.

As C.S. Lewis famously said, “Humility is not thinking less of yourself; it’s thinking of yourself less.”

Humility is the acknowledgement that you don’t have all the answers and that others have something to offer.

The opposite of humility is pride. Ego gets in the way of good critical thinking because it:

1. Seek to Learn and Understand

The aim of research should never be to make a case for the beliefs you already hold. Looking for evidence that you’re right and others are wrong only serves to limit your own understanding of the whole picture.

Instead, as you gather information and solicit opinions, set out with a goal of learning and understanding more than you already do.

2. Stop Worrying about Being “Right”

You don’t have to prove anything to anyone.

Trying to prove you’re right or “win” an argument are ego-driven pursuits. But this is not a competition.

When you’re trying to make informed, solid decisions, doing the right thing is much more important than convincing others you’re right. Let’s face it, maybe you’re wrong… Until you seek to learn and understand others’ perspectives, stop defending your own.

There will be time later to champion your position and convince others to adopt your conclusions. Doing that will be much easier if you’ve spent time learning and understanding their beliefs first. You may even find that your own position is influenced by all the learning and understanding you’ve done – if not, be sure you’ve truly made the effort!

Good critical thinkers mine for alternate perspectives, additional information, and conflicting ideas. They genuinely want others’ input. It’s not a check-the-box pursuit to pretend others are involved. Instead, it’s a quest for more and better information.

High school debaters are taught to gather information about a topic so that they can argue it equally well from both sides. In a debate, the Affirmative team presents a case within the pre-determined topic. Then the Negative team refutes the case. In competition, there are multiple rounds so that every team is sometimes Affirmative and sometimes Negative.

This practice promotes critical thinking. By requiring debaters to prepare for either side of an argument, these competitions force individuals to understand perspectives that may run counter to their own opinions or preferred positions.

In leadership, that same practice of proactively seeking information about all the angles will equip you for any discussion or decision. Good argumentation skills come in handy for examining all the angles and for gaining consensus, too.

Curiosity Will Improve Your Critical Thinking


In a polarized political environment and at a time when the proliferation of information is absolutely overwhelming, there’s only one strategy that will keep you from relying on faulty sources.

That strategy is to question everything, including yourself. Don’t take things at face value. Especially don’t accept information that doesn’t quite pass the sniff test just because it comes from traditional sources or fits in with your own established beliefs.

A healthy dose of skepticism is warranted in a world where truth and facts are no longer seen as absolutes. To understand information offered by any source, we need to do our due diligence to understand the agenda of that source and the players behind the scenes. Has the source done its own due diligence to vet information it’s reporting? (Spoiler alert: probably not… that’s why so much misinformation is out there!)

This is not about becoming cynical or mistrustful. It’s about admitting that bias – whether deliberate or unconscious – is an area where we all have blind spots. You’re not questioning the individual or source. You’re questioning the inputs that went into their conclusions and the rationale they used. There’s nothing offensive or insulting in doing that! It should be a standard practice.

Questioning yourself is so you will “check yourself before you wreck yourself.” Because you’re a leader, the standard is high. People count on you for intellectual honesty, and your credibility can easily be compromised by failing to address your own unconscious biases and/or over-reliance on certain sources.

Three-year-old children incessantly ask this question. It helps them understand the world around them and how things work. It gives them context and helps them cross-apply what they learn. It’s a big part of how they’re able to acquire so much information so fast.

It’s too bad that we stop asking that question as often as young children do. If we asked this question more often, we’d all develop better understanding and broader context before making decisions or drawing conclusions.

The question you should ask more often is WHY?

Being interested, curious, humble, and open to others’ ideas necessitates asking why.

Of course, there’s really no point in asking any question if you’re not also going to listen to the answer. That means REALLY listening, not just hearing and head bobbing while you wait for your turn to talk.

Exceptionally good listeners have the ability to read between the lines because they pick up on cues from the speaker’s tone, inflection, body language, and emotions behind their words.  They can do this because they aren’t distracted by their own thoughts as they try to prematurely craft a response rather than fully listening to comprehend.

If you miss pieces of what’s been shared, your response will not be on target. You limit your own ability to think critically if you don’t gather all the information offered by listening well.

Slowing Down Will Improve Your Critical Thinking

Thinking isn’t meant to be hurried, automated, or reflexive. To think means to have a conscious mind, to remember experiences, to reason and consider, and to employ one’s mind objectively in evaluation. The act of thinking is “to form in the mind as an idea, conception, etc.” This is an active process.

Critical means “involving skillful judgment as to the truth or merit.”

These things take time!  Habits for slowing down your thinking to do a better job with critical thinking:

Reflection isn’t some self-indulgent luxury. It’s not day dreaming. To reflect is “to ponder, fully consider; to process, debrief, review.”

Learning-after-doing or capturing lessons learned is a form of reflection. It’s one way we learn and continually improve.

As we reflect, we can also evaluate information and options critically. What most often prevents us from reflecting is that we don’t value it. Instead, we value fast decisions and efficiency in plowing through more busy work. We multi-task instead of focusing deeply on any one topic. We jump from one conversation to another with no time in between to process what’s been said.

Taking time to reflect on information makes you more agile as a learner and more capable of identifying and cross-applying what’s relevant, important, and impactful.

8. Challenge Your Own Impulses

You have a lot on your plate. You’re under a lot of pressure to perform. You need to get things done. Stat!

No wonder every fiber in your being pushes you to act now… to decide and move on… to do something (anything!) so you can check it off your list.

There’s something else at play here, too. You’re experienced, intelligent, and capable. You’re successful. With that comes confidence and a track record to back it up.

That’s why you sometimes jump to conclusions or rush to judgments. Your impulses are founded in the pressure to act and the confidence to do so.

But are those impulses really reliable? What are you missing if you reflexively respond to them without doing a mental check in first?

To challenge your own impulses, ask yourself why you feel the way you do. Reflect on your own answers to that question. Then be sure you’ve taken proactive steps to engage others and genuinely heard their ideas and input.

Balancing Logic and Emotions Will Improve Your Critical Thinking

Most people make decisions based on emotion and then work to justify those decisions with logic. As a result, they subconsciously seek information that supports their emotionally driven decisions rather than seeking and screening information objectively.

Emotions serve a purpose. They are valid and should not be denied. At the same time, an emotional response is merely a single data point. It should be weighted accordingly.

To build habits for balancing emotions with logic BEFORE making decisions or drawing conclusions:

It’s easier to use logic and rational thinking when you are equipped with skills for doing so. Without awareness and skills in these areas, your emotions have too much unchecked influence on your decisions and actions.

To develop awareness of and skills for argumentation, reasoning, and logical analysis, check out this video playlist with 40 shorts that will help you get started.

10. Recognize and Call Out Misleading Information

Gaslighting, propaganda, bandwagon appeal, falsehoods, and half-truths abound in modern media and narratives. Once the domain of advertising and politics, outright deception has become more prevalent. It’s justified in all sorts of ways, including claims about the common good (when the only real good is for the perpetrators who have something to gain).

By becoming a strong critical thinker, you’ll recognize these tactics sooner and more often. Asking why, using logical analysis, reflecting and evaluating information will expose others who attempt to use these tools on you.

When you see these attempts, call them out. In the workplace, chances are that people using these tactics aren’t fully aware of what they’re doing. They’re just emulating what they see every day, and they think these are legitimate and acceptable.

As you challenge these logical fallacies and intellectual dishonesties, you’ll be modeling a higher standard for others. You’ll be teaching them to become critical thinkers, too. And you’ll help them to become more discerning as they grapple with information overload, too.