Why You Should Avoid Using Nicknames 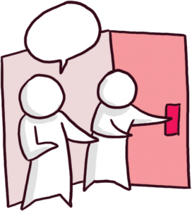 One of the first things our parents give each of us is a name. Our names may be steeped in tradition, created, mixed and matched, debated, tried out, and lovingly conferred even before we are born. Our names are special.

Despite the care that goes into bestowing a name on someone, names are often used casually and can even be disrespected by others. In fact, people are often asked to change their names as if they were simply changing their shoes. Some instances include:

So, what’s in a name? As leaders, does it matter if we call people by something other than their given or chosen name? Is this a big deal or not?

Apparently, parents think it matters. Across all cultures and even in primitive times, names have been given with care and consideration. Naming someone is our first formal way of differentiating an individual from every other person. Publicly celebrating or registering a name is also a ritual that is widely practiced, in both a civic and a religious manner for many cultures. Names are used in virtually every legal transaction throughout a person’s life. They are recorded on birth certificates and on death certificates, bookmarking the life of an individual.

Similarly, people who are faced with a name-changing life event also seem to think there is significance in the adoption of a new name. Adoptions, marriages, celebrity name changes (remember all the press coverage and buzz surrounding Vanity Fair's "Call Me Caitlyn" article in 2015?) and other life events that involve a new name are planned and celebrated. Choices are made, and an event occurs. After that time, if someone has chosen to change their name, we are all expected to respect that new name and to use it.

Freud believed that purposefully mispronouncing someone’s name was an intentional statement of power, a disrespect that essentially said “you are not important enough for me to call you by your given name.” Politicians in recent times have used this intentional slight (e.g. when George H.W. Bush persisted in mispronouncing Saddam Hussein’s name). At some level, when people really matter to us, we do invest time and care in learning their name and in saying it correctly. So it makes sense that not learning and using their preferred name would suggest the opposite – that we don’t care enough to do so.

Intentional or not, it can feel like a slight when someone doesn’t bother to remember or correctly pronounce your name. Greater sensitivity to how people feel about their name is something that would benefit everyone. I don’t mind at all when someone double checks by asking a question like “Do you prefer ‘Deb’ or ‘Debbie?’” In fact, I feel that is respectful and considerate. I’ve talked to others who have names that are challenging to pronounce, and they tell me that it rankles them when someone repeatedly butchers their name without asking for help with pronunciation. And I’ve talked to lots of people who tolerate but never really appreciate being given a nickname or replacement name to please a group.

To connect with others, it’s important to start with the basics. And a name is as basic as it gets. Hearing, remembering, correctly pronouncing and respecting the name someone wants to go by is an easy way to dignify others.

Deb Calvert is a TLC Certified Master and expert on the evidence-based Five Exemplary Practices of Leaders. Book Deb today to speak at your leadership events, and subscribe to our blog for weekly articles on how to improve your leadership skills.

Editor's note: This blog was originally published January 2016 and has been recently updated.